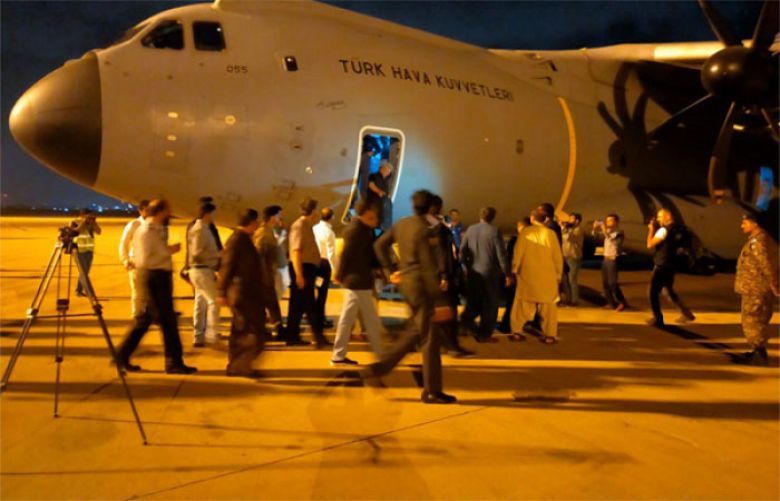 In a statement, the Turkish Disaster and Emergency Management (AFAD) said Turkiye continues to extend its helping hand to Pakistan, where millions of people have been affected by floods.

Turkeye has so far dispatched 14 planes and 12 "Kindness Trains" carrying humanitarian aid supplies to Pakistan under the coordination of AFAD and with the support of the government, municipalities and Turkish nongovernmental organizations.

Planes and trains loaded with over 25,000 tents, 409,000 food parcels and cleaning materials, 38,000 blankets, beds and pillows, and over 2.2 million pieces of medical equipment have been dispatched to Pakistan.

A total of 23 people – including 12 AFAD personnel, a medical team comprising three persons, and eight NGO officials – are working in Pakistan to coordinate the distribution of aid and to assist in the establishment of tent cities, the disaster management authority said.

With seven more deaths, the number of casualties from flood-related incidents across the country has risen to 1,576 since mid-June, according to Pakistan's National Disaster Management Authority.

Some 803,400 houses have been completely destroyed, while over 1.21 million houses are partially damaged across the country.

The floods have displaced hundreds of thousands of people who are living in tents.

The monsoon season in Pakistan, like in other countries in the region, usually results in heavy rains, but this year has been the wettest since 1961.

Currently, one-third of the country is underwater as the massive rains and melting glaciers have caused the country’s main Indus River to overflow, inundating vast swaths of plains and farms.a