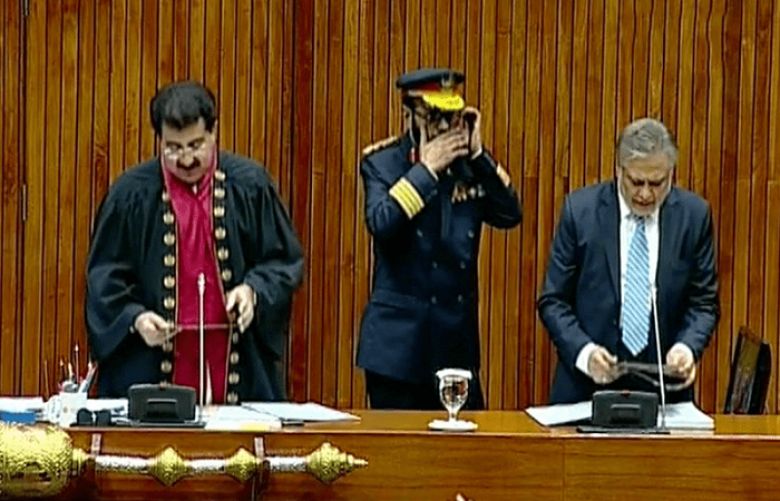 PML-N leader Ishaq Dar on Tuesday took oath as a senator during a swearing-in ceremony at the Senate after living five years in self-imposed exile in the United Kingdom.

Dar had been successfully elected to the Senate from Punjab but had been out of the country since October 2017.

Senate Chairman Sadiq Sanjarani administered the oath amid the ruckus created by the Opposition. PTI members tore the copies of the agenda of the meeting to register their protest and also surrounded the dais.

The Senate chairman directed all members to maintain the decorum of the Upper House as Dar continued to receive felicitations from members of the coalition parties.

The politician, who touched down in Pakistan with Prime Minister Shehbaz Sharif Monday night, will swear in as the federal finance minister tomorrow (September 28) at 10am.

President Arif Alvi will administer oath to Dar at Aiwan-e-Sadar. All arrangements for the oath-taking ceremony will be completed by tomorrow morning.

“I have returned to my country by the grace of God. I will try my best to pull Pakistan out of the [economic] maelstrom it is surrounded with,” Dar had said.

He shared that PML-N President Nawaz Sharif and the PM have handed over the responsibility of the finance ministry to him.

“We pulled Pakistan out of an economic maelstrom back in 1998 and 2013,” the incoming finance minister said.

Dar has returned to “facilitate” the government in its efforts to resurrect the cash-strapped economy by taking over the key portfolio of the finance ministry.

The decision was made during a meeting of PML-N leaders in London, including Nawaz Sharif, PM Shehbaz, and others. During the session, several issues related to the country were discussed in detail.

According to a PML-N spokesperson, during the meeting, Miftah handed over his resignation to Nawaz and thanked him for giving him a chance to lead the ministry.

Miftah also said that over the last four months, he performed to the best of his abilities and remained loyal to his party as well as the country.

However, he will continue to remain part of the government.