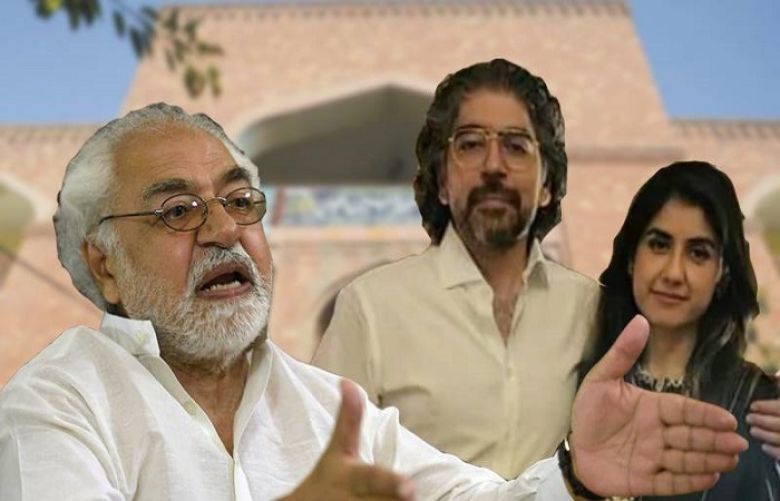 An Islamabad district and sessions court on Monday extended the physical remands of the main suspect in the Sarah Inam murder case, Shahnawaz Amir, and his father Ayaz Amir.

Shahnawaz was arrested last week for allegedly killing his Canadian national wife. The incident took place at a farmhouse located in Shahzad Town where the suspect lived along with his mother.

His father and senior journalist Ayaz Amir, was also arrested for his alleged involvement. Both Shahnawaz and Ayaz were presented in the court of Civil Judge Muhammad Amir Aziz after their remands expired.

During the hearing today, the police requested an extension in the remands of the suspects for seven days.

“We are yet to seize their passports and bank accounts,” the investigating officer (IO) said.

The judge inquired about Ayaz’s role in the case.

“He has been nominated by the victim’s uncle and aunt,” the IO replied, elaborating that the journalist hailed from Chakwal and was the main suspect’s father.

Judge Aziz also asked about the whereabouts of the victim’s parents to which the IO said that they were in Canada and would reach Pakistan by tomorrow (Tuesday).

During the hearing, Ayaz said that he would “fight the case” himself. “We are traumatised. I informed the police about the incident myself.

“I was in Chakwal when the crime took place and informed the inspector general (IG) myself,” the journalist said, adding that in the absence of the IG, the senior superintendent was informed.

I informed the police about the location of the farmhouse, he said. “But the police only gave their stance in the FIR. They never mentioned me in the complaint.

“The police are saying Sarah’s uncle recorded a statement. If you have accused me, present the evidence,” he contended, claiming that in such incidents, the crime scene was “often tampered” with.

Ayaz also said that he had told Shahnawaz’s mother, Sameena Shah, not to let him leave the house. “In the one-day remand, the police didn’t ask me anything. They have just taken away my mobile phone,” he added.

For his part, the prosecutor argued that Ayaz was named in the complaint by the victim’s family. “Her parents will reach Islamabad tomorrow. They have all the proof,” he said.

Subsequently, the court extended Shahnawaz’s remand for three days, while Ayaz’s remanded was extended for a day.

Earlier in the day, Shah had filed a petition seeking pre-arrest bail in the case after police issued an arrest warrant for Sameena.

In the petition, Sameena presented her version of the incident, stating that Shahnawaz had sent her a message on WhatsApp “before the heinous crime, to arrange the rukhsati of the deceased by speaking to the deceased’s father”.

“Everything was normal the night before the crime took place,” she said in the petition.

Sameena said she slept after receiving the message and was informed about the incident by Shahnawaz, who had called her on her mobile phone at 9:12am the next day.

Thereafter, Sameena rushed to Shahnawaz’s room, the petition said, adding that by the time she reached the room, Sarah had already died.

“The petitioner asked Shahnawaz to sit in her room and Ayaz … had called the police and within few minutes, the police had arrived and took custody of Shahnawaz,” the plea read.

Sameena termed the FIR “false and frivolous” and stated that she had no connection with the case or the murder. “But her name is being mentioned by the media that an application has been moved for her arrest,” the petition said.

Reiterating that Sameena had no connection with the murder “and was not even an eyewitness to the incident”, the plea stated that “her reputable name is being added for no reason but to jeopardise her years [of] reputation which clearly establishes the mala fide intent and ulterior motives”.

Moreover, the plea mentioned that Sameena was an elderly woman with health issues and said she was willing to furnish sureties against bail, as well as “comply with an investigation that may be conducted by law enforcement agencies”.

Hearing the petition, Judge Sheikh Sohail accepted Sameena’s plea and instructed her to join the investigation in the case.

Police have become a complainant in the case, with the FIR registered on the complaint of Shahzad Town Station House Officer Nawazish Ali Khan.

The complaint stated that on September 23, Sameena called police and informed them that Shahnawaz had murdered his wife “with a dumbbell”.

“My son is present in the house and has hidden the body,” the FIR quoted Sameena as saying, adding that the police subsequently raided the house.

“He had locked himself up in his room. When they broke inside, there were stains of blood stains on Shahnawaz’s hands and clothes,” the police said in the complaint.

“He then confessed that he had repeatedly hit his wife with a dumbbell during an argument and then hid her body in the washroom’s bathtub.”

According to the FIR, Shahnawaz also said he had “hidden” the murder weapon under his bed.

Upon examining the dumbbell, the police found blood and hair on it. “We have sent it for forensics,” the FIR added.

The complaint further stated that the victim’s body had been sent to the Polyclinic Hospital for a postmortem examination.