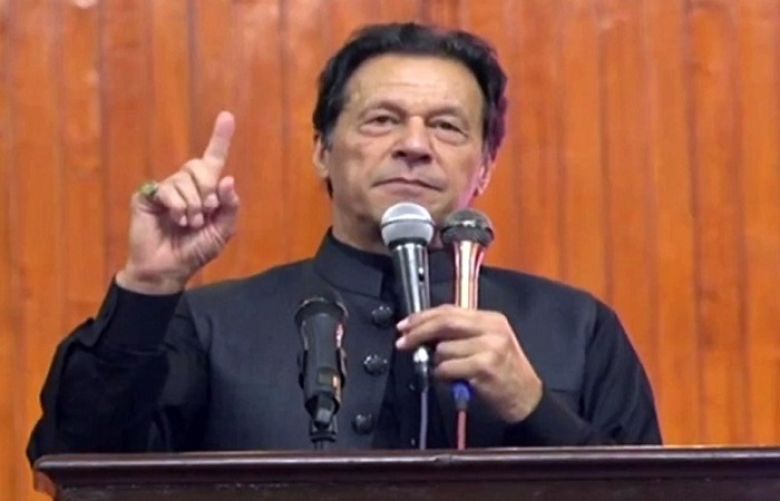 PTI Chairman Imran Khan Monday claimed that another audio leak of PML-N Vice President Maryam Nawaz would come to the fore after back-to-back leaks of the ruling coalition leaders.

Speaking during an event, the former prime minister said that in the audio that will be leaked in the coming days, Maryam could be heard telling her father, PML-N supremo Nawaz Sharif, that Imran will soon be disqualified in the Toshakhana reference.

"If they had a little shame, they would have resigned after their audio leaks. However, since they — Prime Minister Shehbaz Sharif and his ministers — are not resigning, we will have to force them out," the PTI chairman said.

Three audios have been leaked in the last week — with PM Shehbaz and Maryam being at the centre of the controversy.

Before that, another leaked audio had gone viral on social media — allegedly featuring PM Shehbaz — containing a discussion regarding PML-N Vice President Maryam Nawaz asking for a power plant from India to be imported for her son-in-law.

Apart from that, Maryam's alleged audio conversation was leaked in which she can be heard advising the PM to jack up the fuel prices.

Maryam, who had been opposing a hike in fuel prices during her media appearances, can be heard suggesting PM Shehbaz increase fuel prices. She also complained about Finance Minister Miftah Ismail.

Moving on, the former premier said that the PTI government negotiated with Russia to strike a deal on importing cheap oil and wheat, whereas, the incumbent rulers are in power just to "plunder money and move it abroad", with no plans for relief for the people.

"Ishaq Dar — who is about to come to Pakistan today — left Pakistan on the then-prime minister's plane," the premier said, terming all coalition rulers as corrupt.

"Over here, thieves are involved in deals. Ishaq Dar left Pakistan for London. Ishaq Dar could not justify his assets, which is why he absconded. He is returning under a deal," Imran said.

In a separate event in the city, the PTI chairman claimed that 60% of the federal cabinet's members are facing corruption cases and that the country's "biggest dacoits" have now become the rulers.

Imran said that the PTI government was removed from power under the guise of inflation, however, currently, inflation had increased by 50%.