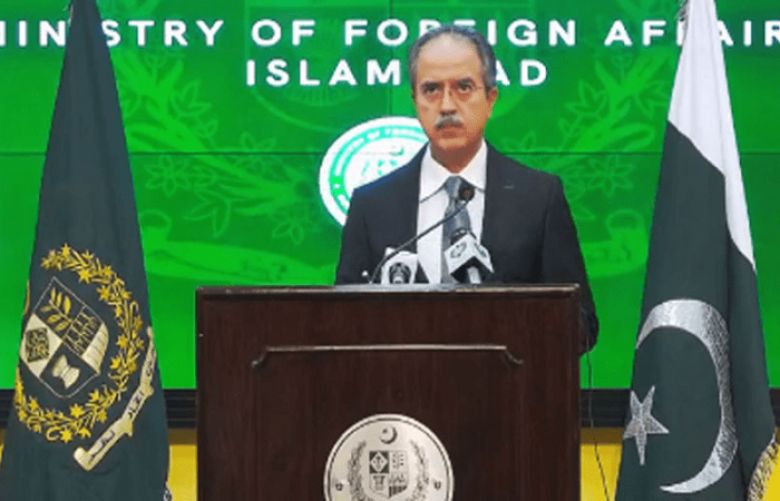 The Foreign Office on Thursday “categorically rejected” reports of a Pakistani delegation visiting Israel, clarifying that there was no change in the country’s policy on the subject.

According to FO spokesperson Asim Iftikhar Ahmed, the “reported visit in question was organised by a foreign NGO (non-government organisation) which is not based in Pakistan”.

“The trip organiser said on Wednesday that the delegation included representatives from the American Muslims and Multifaith Women’s Empowerment Council and Sharaka, a US-based non-government group founded in the wake of the Abraham Accords, which was brokered by the Trump administration in 2020 and normalised relations between Israel and four Arab countries — the United Arab Emirates, Bahrain, Sudan, and Morocco,” an Associated Press report said.

It also quoted the head of the delegation, Naseem Ashraf, as quoting that the delegation was visiting Jerusalem to “promote inter-faith harmony”.

“He refused to give any further details about other members of the delegation. Ashraf used to be Pakistan’s development minister and the chairman of the Pakistani Cricket Board,” the report added.

Pakistan does not recognise Israel and, therefore, doesn’t have diplomatic relations with it. The country has been a staunch supporter of a Palestinian state.

After the Abraham accords, Pakistan had made clear that it cannot recognise Israel until a “just settlement of the Palestinian issue” is found.

In the statement issued today, the FO spokesperson said that Pakistan’s position on the Palestinian issue was clear and unambiguous.

“There is no change whatsoever in our policy on which there is a complete national consensus. Pakistan steadfastly supports the Palestinian people’s inalienable right to self-determination,” he clarified.

Ahmad added that the establishment of an independent, viable, and contiguous Palestinian State with pre-1967 borders and Al-Quds Al-Sharif as its capital, in accordance with the relevant United Nations and Organisation of Islamic Cooperation resolutions, was “imperative for just and lasting peace in the region”.

Earlier this year, a controversy sparked after a number of Pakistani expats and a couple of citizens travelled to Israel as part of a delegation.