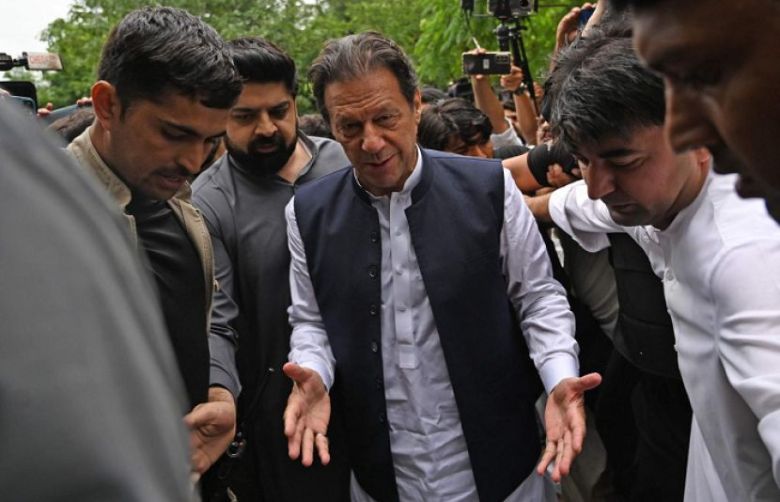 An anti-terrorism court transferred the terror case registered against PTI Chairman Imran Khan to a sessions court on Tuesday following the Islamabad High Court’s (IHC) order to remove the Anti-Terrorism Act (ATA) section from the case.

Khan was charged with a terror case after he threatened an additional session judge and police officials of the capital city while addressing the supporters at one of his party’s political rallies.

The hearing of the case was conducted by Justice Raja Jawad Abbas Hassan in the anti-terrorism court in Islamabad. PTI chief’s counsel Babar Awan appeared in the court on his behalf and read the IHC’s order to remove terror sections from the case.

Awan requested that the case be transferred to the session court following IHC’s order.

Responding to the request by Awan, the anti-terrorism court’s judge said that no challan has been submitted to process the removal and that another bail application must be provided.

“We have neither received the challan, nor the witness statement, or anything else, then what should we transfer?” the judge questioned.

The judge said that the court only had the matter of bail until now and following the IHC’s order, it no longer possesses the jurisdiction.

The court also sought Special Prosecutor Rizwan Abbasi for his opinion and held the hearing till he showed up. After the break, the court ordered to transfer Khan’s case to the session by adhering to the IHC’s order.

The anti-terrorism court, in its order, stated that the accused is free and can approach the relevant forum for bail.

The court concluded the PTI chairman’s bail petition in the case.