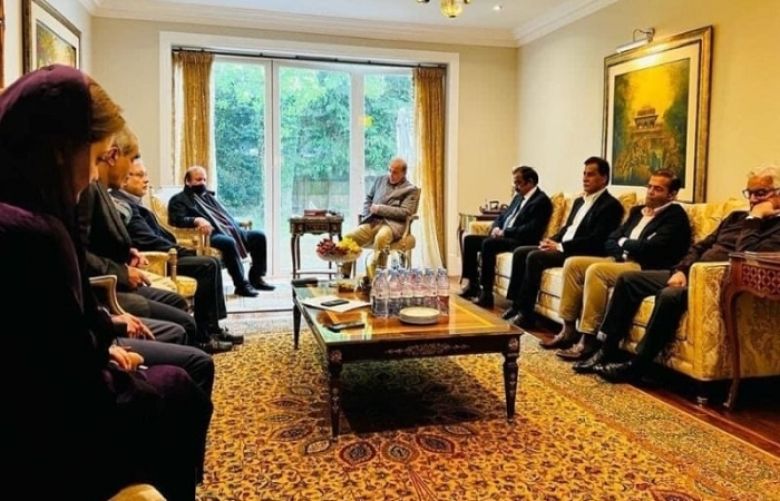 The premier arrived at the office of his nephew Hussain Nawaz in London to meet his brother, accompanied by former finance minister Ishaq Dar, Defence Minister Khawaja Asif and his son Suleman Shahbaz.

The PML-N leaders sat down to discuss the current political and economic situation in Pakistan, along with other issues.

Speaking to the media following the meeting, PM Shehbaz said the entire nation is united for relief and rehabilitation of flood-affected people and the government is determined to complete the rehabilitation phase at the earliest.

He said the government has allocated seventy billion rupees to provide relief to the flood victims and added that a cash assistance of twenty five thousand rupees is being provided to each flood-affected family through Benazir Income Support Programme .

He said the federal government, in collaboration with provinces, is providing food, tents, blankets and other essential items to the flood victims.

Earlier on Saturday, Federal Energy Minister Khurram Dastagir said that the premier is likely to discuss the appointment of the new chief of army staff as well during his meeting with Nawaz.

Chief of Army Staff (COAS) Gen Qamar Javed Bajwa is set to retire in the last week of November. The matter of the new chief’s selection has since caused a stir in political circles with the Pakistan Tehreek-e-Insaf (PTI) and government coming to verbal blows on the matter.

Without mentioning the name of PTI chairman and ousted premier Imran Khan, Dastgir maintained that no matter how many times anyone met with army chief Gen Qamar Javed Bajwa, PM Shehbaz would make the final decision.