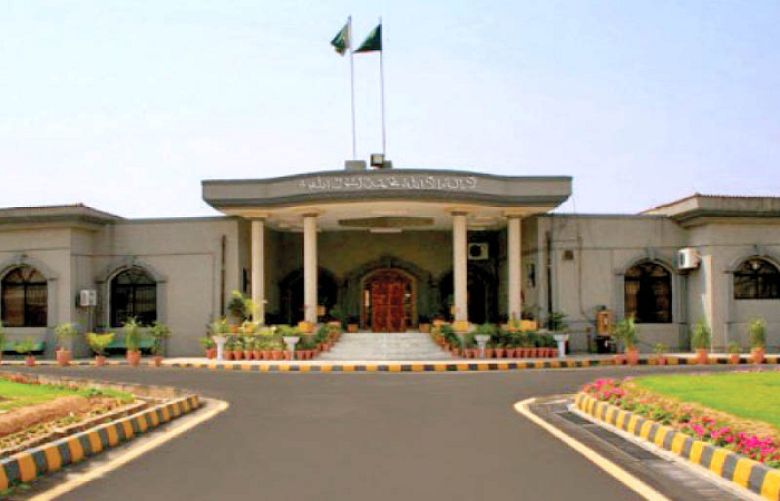 The Islamabad High Court (IHC) on Thursday told the government not to downplay charges as serious as terrorism while questioning whether PTI Chairman Imran Khan's speech against a female judge and Islamabad police warrants the offence.

IHC Chief Justice Athar Minallah made the remarks while hearing a plea seeking dismissal of the terror case against PTI Chairman Imran Khan.

Khan was booked in a case under sections of the Anti-Terrorism Act (ACT) for making threatening remarks against an additional sessions judge and senior officials of the Islamabad Police in his speech at a rally.

The party had moved the Islamabad High Court (IHC) to grant Khan transit bail till August 25, but the court had directed the former premier to approach an ATC as it was a terror case.

The FIR registered against Khan states that he threatened Additional Sessions Judge Zeba Chaudhry and police officers at a rally in F-9 Park to “terrorise” police officials and the judiciary.

The main aim was to prevent the police officers and judiciary from carrying out their legal obligations, states the FIR. The FIR was registered on the complaint of Magistrate Ali Javed in Islamabad's Margalla Police Station under Section 7 of ATA.

At the outset of the hearing, the Justice Minallah said that the court had ordered Imran Khan to join the investigation and asked the investigation officer to guide the court on whether the Anti-Terrorism Act (ATA) is applicable to the former premier's statement.

"Do not confuse things, as a separate case of contempt of court is under trial against Imran Khan," the chief justice said.

At this, the special prosecutor informed the court that Khan appeared before the joint investigation team (JIT) to record his statement on Wednesday.

Following the court's directives, Abbasi read the transcript of Imran Khan's "threatening" speech at the rally, contending that sections of ATA apply to the words used in the speech.

"Is there anything else other than his [Imran Khan] speech? This allegation is of a very serious nature. There is a Supreme Court verdict on the matter," Justice Minallah said.

"The speech was absolutely wrong, with inappropriate words used, but does not warrant terrorism charges," the judge remarked.

"Don't downplay the seriousness of terrorism charges," IHC Chief Justice Athar Minallah said, while responding to the arguments of the special prosecutor.

The IHC adjourned the hearing till September 19, while directing the JIT officials to meet and then inform the court about the developments in the probe on Monday (September 19).

At a rally at the F-9 park in Islamabad, the PTI chair had warned that he would “not spare” Islamabad's inspector-general, deputy inspector general, and female magistrate, vowing to file cases against them for allegedly torturing PTI leader Shahbaz Gill.

“We will not spare the IG and DIG,” he said while addressing the rally. The former prime minister called out Additional District and Sessions Judge Zeba Chaudhry, who had approved Gill’s two-day physical remand at the request of the capital police, and said she, too, should prepare herself as a case will also be registered against her.

The ex-PM led the rally in support of incarcerated leader Gill, who the party alleged was subjected to “gruesome torture” in police custody.