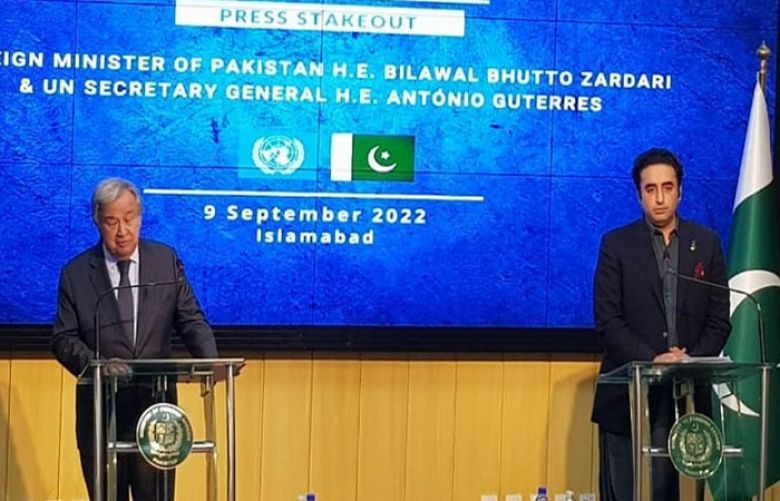 UN Secretary General Antonio Guterres has urged the developed countries to step up and provide Pakistan with financial and technical resources it needs to survive the extreme weather events like deadly floods.

Speaking at a joint press stakeout, along with Foreign Minister Bilawal Bhutto Zardari, in Islamabad on Friday, he also issued a global appeal urging the world to stop the madness, end the war with nature, and invest in renewable energy now.

He said the developed countries must produce a credible roadmap to back their commitment to double their financial support. He said that loss and damage from the climate crisis is not future events as it is happening now all around us.

The Secretary General said cash assistance and food items have been distributed amongst the flood victims of Sindh and Balochistan with the support of funds released from UN Central Emergency Response Fund. He said what we have done is a drop in the ocean of the needs of the Pakistani people. He said millions of flood-hit are living in camps and direly need help from the global community. He said Pakistan needs massive financial support for relief and recovery. He said it is not a matter of solidarity or generosity it is a matter of justice.

Speaking on the occasion, Foreign Minister Bilawal Bhutto Zardari said a third of Pakistan's landmass is under water, one in every seven people, and around 35 million people have been devastated. He said the people have lost their loved ones and livelihood and now they are facing a very real threat of hunger, disease, and further devastation. He said all of the possessions of the flood affected people have been taken away from them.

The Foreign Minister said the people of Pakistan have not contributed to the catastrophe they are facing today. Instead, they are paying the price for the industrialization of richer countries.

The Foreign Minister said the government at this point of time is unable provide shelter, food and clothing to the affected people. He said around 1,300 people have died so far and a third of them is children. He said flood affectees are staring death in the face because, water borne diseases, an army of mosquitoes, bacteria and other viruses are threatening them.

The Foreign Minister said we need more resources to enter the rehabilitation and reconstruction phase. He said we have to build houses, schools, hospitals, and other road infrastructure destroyed in floods.

He thanked the UN Secretary General for supporting Pakistan in this incredibly difficult time. He said I look forward working with UN to not only save the people of my country but to work with other developing countries, who have not contributed to the catastrophe of climate change.