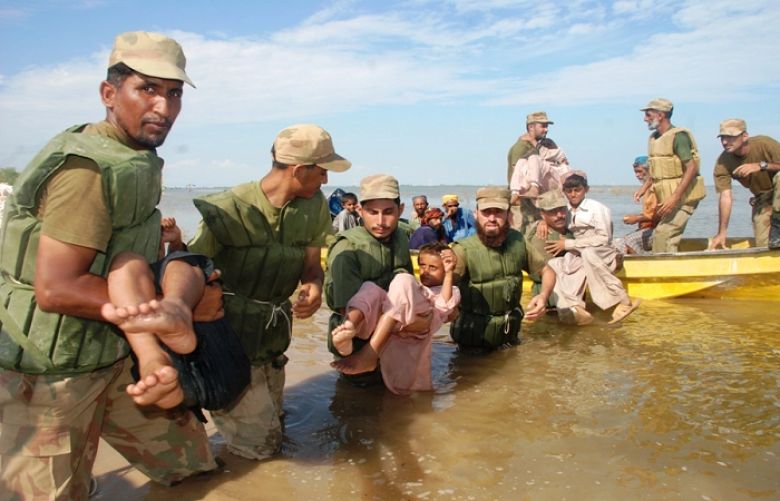 Government has decided to deploy Pakistan Army to help the civilian authorities in rescue operations in the flood-hit areas.

The troops are being deployed in pursuant to the requests made by all the provincial governments in wake of the emergency situation due to torrential rains and floods.

In Khyber Pakhtunkhwa, scores of people have died due devastating floods in rivers and streams. The flash floods washed away dozens of hotels, bridges, mosques and link roads in the Upper Swat district while hundreds of houses, shops and restaurants were submerged.

The Munda Headworks in Charsadda on Friday collapsed due to heavy monsoon rains due to which water levels in Jindi and Khiyali canals had increased.

The provincial government has declared rain emergency in several districts as flash floods triggered by torrential rains wreaked havoc in most parts of the province.

Meanwhile Balochistan remained cut off from the rest of the country as linking highways remained non-operational because relentless rains and floods did not allow authorities to repair the damaged artery.

Quetta and its outskirts remained submerged as over a day long rain spell inundated most parts of the provincial capital, bringing life to a standstill and leaving hundreds of families without homes.

Elsewhere in the country, a Punjab PDMA spokesperson said that moderate to high level of flooding was expected in the Indus River at Kalabagh, Chashma and Taunsa during the next 48 hours, which could affect the Mianwali, Bhakkar, Dera Ghazi Khan, Muzaffargarh and Rajanpur districts.