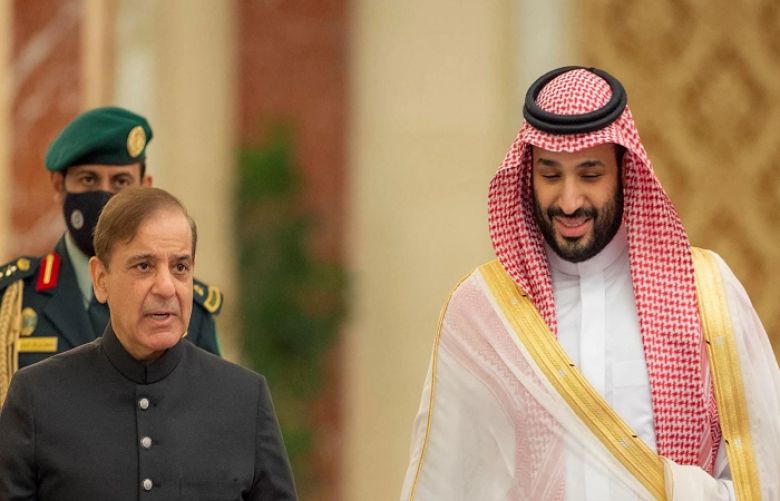 According to a statement, PM Shehbaz made a telephone call to Saudi Crown Prince Mohammad Bin Salman, Deputy Prime Minister and Minister of Defense.

During the telephone conversation, PM Shehbaz discussed cooperation opportunities between the two countries and ways to enhance them in all fields.

Pakistan have Saudi Arabia have agreed to intensify mutual cooperation in the fields of investment, energy and trade, Radio Pakistan reported.

Both leaders also reviewed the fraternal and historical relationship binding the Kingdom and Pakistan.

In his message to President Dr Arif Alvi, the Saudi King expressed his best felicitations to the government and friendly people of Pakistan. He also expressed wishes for steady progress and prosperity of Pakistan.

In his message, Crown Prince Mohammed also congratulated the Pakistani nation and expressed best wishes for steady progress and prosperity of the people of Pakistan.

Both the leaders reaffirmed the resolve to further solidify their strong brotherly relations spanning over decades.

The Saudi Crown Prince felicitated the Prime Minister and Pakistani nation on the 75th Independence Day. He expressed his good wishes for the development and prosperity of Pakistan.

Prime Minister Shehbaz Sharif and Crown Prince Mohammed bin Salman reviewed the progress on the decisions taken during the visit of the former in April this year.

Alluding to the help extended by the brotherly country Saudi Arabia to Pakistan during difficult times, the Prime Minister thanked the Saudi Crown Prince's recent support for the stability and development of Pakistan's economy.

The Prime Minister invited the Crown Prince to visit Pakistan soon which was accepted by him.