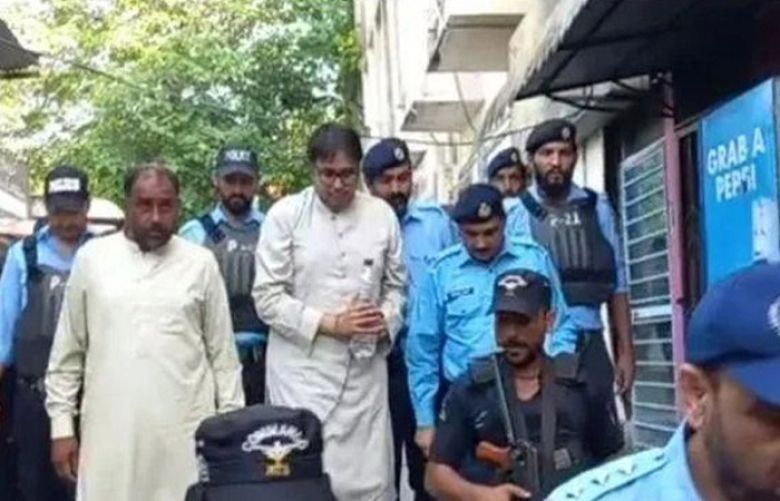 An Islamabad court on Friday rejected a police request to extend the physical remand of senior PTI leader Shahbaz Gill, who was earlier presented in court after the completion of his two-day remand in a sedition case.

The court, however, granted a judicial remand while announcing the verdict it had reserved earlier during the early morning hearing.

Gill was earlier presented in court after the completion of two-day remand in a sedition case.

During the hearing, the police requested for an extension in Gill's remand.

The investigation officer told the court that the CD of the private TV channel's programme in which Gill had made anti-army remarks has been acquired and the audio evidence matched.

A treason case was registered against him at Kohsar Police Station under several sections Pakistan Penal Code, including 124-A (sedition), 131 (abetting mutiny, or attempting to seduce a soldier, sailor or airman from his duty), 153 (wantonly giving provocation with intent to cause riot if rioting be committed; if not committed), 153-A (promoting enmity between different groups, etc), and 505 (statements conducing to public mischief), 506 (punishment for criminal intimidation), among others.

Two PTI leaders Kanwal Shauzab and Ali Nawaz Awan finally arrived in court to show support to Gill during the hearing. No one from the PTI leadership had gone to meet Gill in jail or came forward in his support since his arrest.

However, the police barred the politicians from moving towards the courtroom.

'Haven't made a confessional statement': Gill

Later, while speaking to media outside the courtroom, Gill denied giving any confessional statement.

"I haven't made any confessional statement," said the PTI leader, who earlier admitted to giving a statement against the Pakistan Army, which he said was in line with the party's policy.

Gill made the confession during an interrogation, sources said. "I think I did not give the statement in digression from the party's policy," he was reported as saying in a police statement. "I gave the statement after contemplation."

‘Can never think of making such a statement against Pakistan Army’: Gill

During the hearing the court also ordered expelling irrelevant persons from the courtroom. It allowed the legal team to meet Gill and his handcuffs were removed at the request of the lawyers.

In his statement before the court, Gill said: "I can't even think of making such a statement about the Pakistan Army. I'm a professor not a criminal."

Gill pulled up his shirt and showed his back to the magistrate and claimed he has been severely tortured and no medical checkup has been done.

"A faux report has been prepared for my medical examination," he said.

He said that he hasn't been kept in the lockup of the Kohsar Police Station where the case has been registered and was forced to stay awake all night and wasn't being allowed to meet his lawyers.