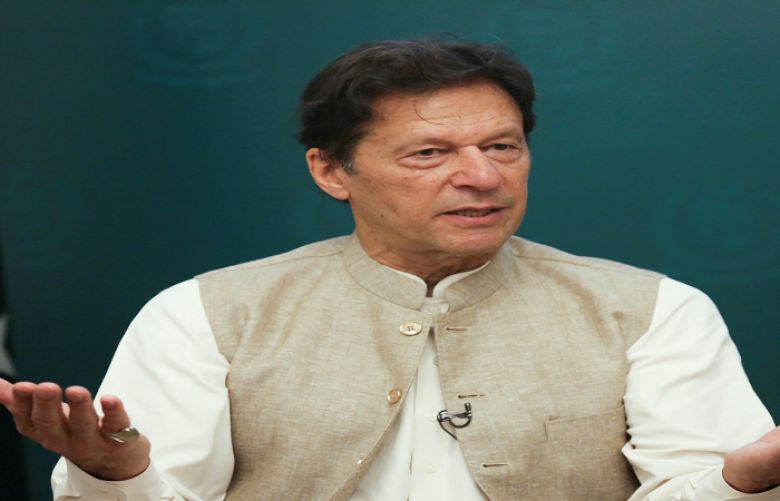 Former prime minister and Pakistan Tehreek-e-Insaf (PTI) Chairman Imran Khan has said that a conspiracy has been hatched to pit his party against the military.

Addressing his party workers and supporters via a video link on Wednesday, Imran said that the coalition government is conspiring that the country's biggest party fights its own army.

"It is being done under a plan and they want to give an impression that the PTI is anti-army," he added.

The former premier said that when his government was ousted, India, Israel and many western countries were the happiest. "India used to say Imran Khan is a puppet of the army but during our tenure army and government were on the same page."

He said that PTI workers unearthed the disinformation campaign against the country.

"After the Mumbai attacks, Asif Ali Zardari said the DG ISPR should be sent to India. On other hand, we have Nawaz Sharif who, in Dawn leaks, said the ISI was involved in terrorism in India," he added.

Imran said that Nawaz Sharif even invited Indian prime minister Narendra Modi to the family wedding. "These people are calling us traitors. All their money is abroad and they have numerous corruption cases but still, they call themselves patriotic."

"What they are trying to do now is that they are campaigning against the army and us so we get into a fight. They want to break the party and the ECP's prohibited funding case was its first step."

The PTI chairman said that his party is the only one in Pakistan which initiated political funding in the country.

"40,000 people funded us but they declared them foreigners. We have audit reports. We provided each and everything to the ECP but it compiled a report full of lies. If the court properly investigates, it will be proven that the PTI is the only party which got its funding legitimately," he said and added that there are elements who are trying to get him disqualified.

Talking about the Toshakhana case, Imran said that all people who are in significant government positions get gifts. "Asif Ali Zardari got three cases from Toshakhana whereas Nawaz Sharif got one but all of it is illegal."

Now the coalition government, the PTI leader said, will try character assassination of him. “They know which media houses will support them. They will try to humiliate me in public. They will try to use muscle to crush us. This will damage the country because of their own interests. The ones who ousted us ... do they want a strong Pakistan? They want to keep Pakistan on life support."

The ousted prime minister said that the conspiracy against his party is very serious and dangerous. "When you put the country's biggest party against the army, no other thing can be as dangerous. I was 18 when I went to East Pakistan. I learnt how the hatred against the army spread. It is very unfortunate for us but it is being repeated today."

He said that the ones who are involved in the conspiracy are the local collaborators working on the whims of their foreign masters.

"After our government was ousted, they wanted to crush our party. But then [Punjab] by-elections happened. They were confident they will win but people in huge numbers came out and voted for us and all their plans failed. So their fear increased further," he added.

The former PM said that he doesn't know whether Pakistani airspace was used to kill al-Qaeda leader Ayman al-Zawahiri. However, he added that many foreign newspapers are saying that Pakistan's airspace was used."During the war on terror, we lost 80,0000 Pakistanis for what $20 billion? There is a small elite which benefitted [from that money]. I fear for a small amount, we might again get into another conflict. We know from the past that there is little benefit in it and it destroys us," he added.

He revealed that many PTI members are saying that they are getting threats from the TTP. "I think this is also part of the conspiracy. They want to make the PTI weak as it will make it easier for them to dictate Pakistan."

Talking about the arrest of PTI leader Shahbaz Gill, Imran said that if he had said something against Pakistan then there is a procedure to follow which involves registering a case.

"You register a case against him but Shahbaz Gill should be given an opportunity to clarify himself... But it is not the way to treat someone by breaking the windows of his vehicle," he added.

He said that the PTI had sufficient street power to shut down the country. However, the country's situation is such that one has to worry about it. "We have resorted to only peaceful protests. Tell me one incident where we did vandalism or tried to harm the country."

Imran further said that there was a conspiracy going on to break the PTI. "They want to make us weak as they plan to the return of Nawaz Sharif before the elections so they are on equal footing as the PTI."

He said that Pakistan needed political stability the most right now so we can get out of this pit. "I fear for our national security as the country is being taken to a point where it would have to make compromises."

Reiterating his stance, the PTI leader concluded that transparent elections are the only way out from the current political uncertainty in the country.