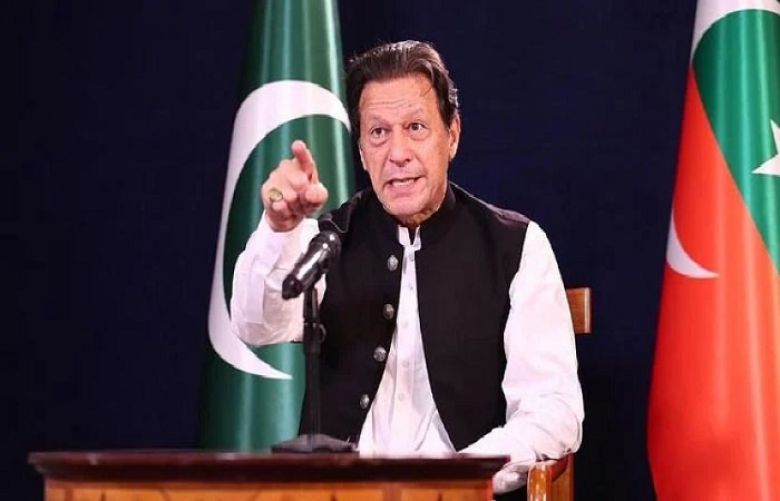 Former Prime Minister Imran Khan has called on the supporters to gather at F-9 park after the Islamabad administration denied permission to protest against Election Commission of Pakistan (ECP) at Nadra Chowk.

Taking to Twitter, the former premier wrote: “Today, I am calling all our people to come out in a peaceful public protest against the CEC and ECP in F-9 park at 6pm.”

The PTI Chairman has also announced to address the gathering between 7:00 pm to 7:30 pm.

In another tweet, Imran Khan said the chief election commissioner (CEC) and the electoral watchdog, in connivance with the government, “conspired to try a technical knockout against the PTI after the PML-N got routed in the Punjab by-elections”.

“Now, they are cowering in fear about the same happening to the entire Pakistan Democratic Movement in general elections,” the former prime minister added.

Earlier in the day, the Islamabad administration denied Pakistan Tehreek-e-Insaf (PTI) permission from holding protest at NADRA chowk. The chowk falls in Red Zone, therefore permission cannot be given to hold protest, the administration replied to the PTI’s request.

It is pertinent to mention here that Imran Khan had announced to stage a protest outside ECP head office in Islamabad on Thursday (today).

He accused the CEC of being “partisan and dishonest” and alleged that Sikandar Sultan Raja tried to sabotage the Electronic Voting Machines (EVMs). “Countries like India and Iran are using electronic voting machines but unfortunately our ECP chief has denied holding polls through EVMs.”

Today I am calling all our people to come out in peaceful public protest against CEC & ECP in F9 Park at 6 pm. I will be addressing the gathering between 7:00 - 7:30 pm.