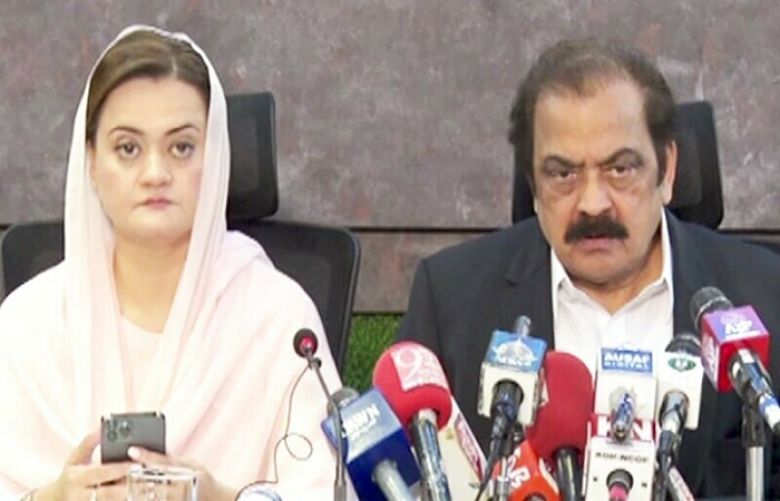 Interior Minister Rana Sanaullah on Wednesday vowed that the government will not grant PTI supporters permission to protest outside the Election Commission of Pakistan (ECP) as it falls in Islamabad’s high-security “Red Zone” area.

In a press conference alongside Information Minister Marriyum Aurangzeb, he said that the demonstrators will be allowed to hold their protest at the nearby F-9 park or the Parade Ground.

“But there will be no permission for protest in [the] Red Zone and anyone who tries to enter [the area] forcibly will be dealt as per law,” he warned.

In a tweet, he also said that there was apprehension of “PTI miscreants attacking ECP”, hence a ban had been imposed on protests in the Red Zone.

In today’s press conference, the interior minister said that peaceful protest was everyone’s right in a democratic society. “We have allocated two spots for them. But if they indulge in violence, action will be taken.”

Referring to PTI’s “Azadi March” in May, he alleged that the party had brought armed activists and ministers with them. “If this time they undertake any adventure, they will be dealt with force,” he warned.

Sanaullah also said the ECP’s verdict had proved that Imran was a “foreign agent” and PTI a “foreign-aided political party”.

“He took money to pollute Pakistan’s politics and infused hatred in it,” he said, vowing that the federal cabinet would take a decision against him tomorrow.

“This foreign agent will be dealt with,” the minister promised.

In response to a question, he explained that there was “credible evidence” against Imran and his party on the basis of ECP’s conclusions. “We are analysing the jurisdiction of the departments.

“If the government has the mandate to declare PTI as a foreign-funded party and present its reference before the Supreme Court […] And if the court upholds it […] the cabinet will proceed on it.”

However, he went on, if the Federal Investigation Agency (FIA) or the police have jurisdiction, they will proceed accordingly.

“Work is being done on that. Requisite time will be taken to decide on this case,” Sanaullah said.

He also stated that PTI leader tried to “build a narrative” to show that the decision came out in their favour.

“Fawad Chaudhry is trying to manoeuvre a point that there is no mention of foreign funds. But the verdict shows that [PTI] is foreign-aided. Now there is no room for them to get out of this.”

The minister added that the party would fulfil its legal responsibilities and do that as per law and not on the basis of personal grudge.