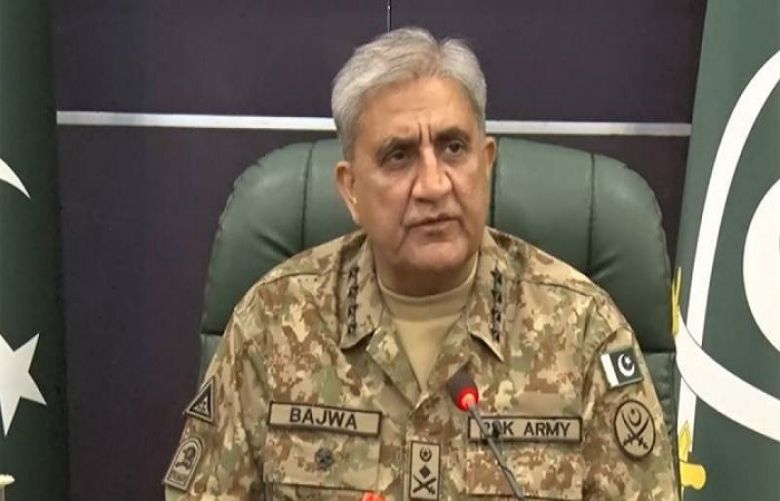 As persistent rains wreak havoc in Pakistan, particularly in Sindh, Chief of Army Staff (COAS) General Qamar Javed Bajwa on Monday appreciated the efforts of formations in relief operations to mitigate the challenges of people affected due to floods and heavy rainfall in the country, the military said in a statement.

According to the Inter-Services Public Relations (ISPR), the army chief expressed these remarks during the 249th Corps Commanders’ Conference held at the General Headquarters in Rawalpindi.

The ISPR said that the forum took a comprehensive review of the security situation with a particular focus on the border and internal security. The COAS lauded successful ongoing counter-terrorism operations and paid rich tribute to the supreme sacrifices of officers and men to ensure the security of borders and the safety of the masses.

The statement said that General Bajwa also appreciated the efforts of formations in relief operations to mitigate the challenges of people affected owing to floods and heavy downpours in the country.

The forum reaffirmed the resolve of the armed forces to extend complete support to civil administration in rescue and rehabilitation activities.

Torrential rains continued for the second day in Karachi leaving at least five people dead in various incidents of electrocution during the past 24 hours.

The electrocution incidents reportedly took place in the areas of Tesar Town, Lyari, Liaquatabad and SITE.

Acting Sindh Governor Agha Siraj Durrani, while expressing regret over the loss of precious human lives during the rains, urged people to stay at home.

Meanwhile, due to heavy rainfall, most of the city areas remained submerged in water, with all major highways flooded, causing serious difficulties to the city’s inhabitants and paralysing normal life.

Saddar reported the highest rainfall in the city with 217 millimetres of rain. Furthermore, residents living near suburban areas including Malir River were forced to relocate after several feet of water flooded the streets. All the while, the poor drainage system of the port city continued to add to its problems.

The rains are expected to continue till July 26, with the new monsoon spell in various districts of rural Sindh that may be expected by July 27.

The district administration of Hyderabad is setting up 29 relief camps in the city to deal with any emergencies during the new spell of monsoon rains, which may continue till Tuesday.

According to a notification issued by the district administration, the relief camps are being established in schools and colleges and would be supervised by the relevant principals.

The monsoon rains have resulted in the deaths of more than 300 people, including 118 children and damaged 8,889 houses, according to the National Disaster Management Authority (NDMA).

A report issued by the NDMA stated that 99 deaths were reported in Balochistan, 61 in Khyber-Pakhtunkhwa (K-P), 60 in Punjab, 70 in Sindh, eight in Gilgit-Baltistan (G-B), five in Azad Jammu and Kashmir and one death was reported in Islamabad.

Nearly 300 people were also injured in the rain-related incidents.