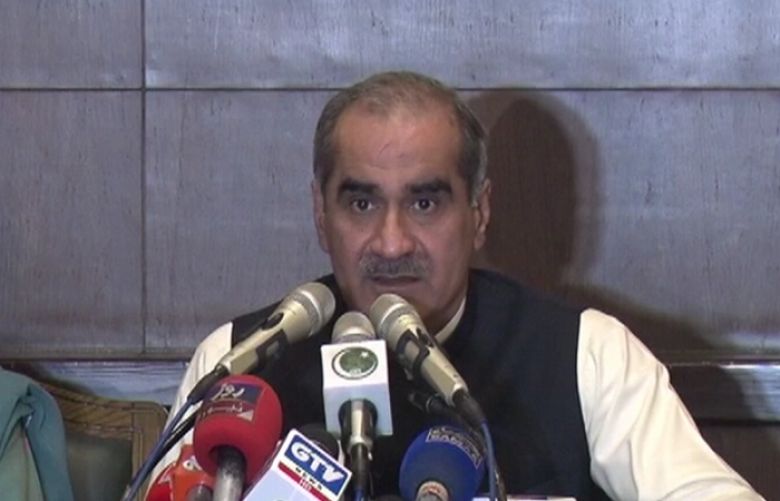 Minister for Railways Khawaja Saad Rafique Tuesday announced that the federal government will complete its tenure, dismissing all speculation regarding the possible dissolution of the government following PTI's victory in the recently-concluded Punjab by-election.

The decision came after the PML-N faced defeat in the Punjab by-elections on 20 constituencies on July 17 against the PTI.

The PTI won 15 seats, while the PML-N managed to clinch victory in only four, and an independent candidate grabbed one.

The announcement was made after a meeting was held under the chairmanship of Prime Minister Shehbaz Sharif in Lahore with the allies.

Talking about the Punjab by-elections, the railway minister said that these elections cannot measure the popularity or unpopularity of PML-N as the party and the coalition government have won five out of 20 seats.

He said that the PML-N leadership has made sacrifices for democracy, adding that the party knows how to save its politics but it decided not to do so.

"The Pakistan Democratic Movement (PDM) requests to respect the decisions made by the Parliament and that it has its reservations on judicial interpretation of Article 63(A)," said Rafique, adding that "legislation is the Parliament's prerogative and it should not be interfered with."

The Supreme Court is hearing a case related to the recent changes in the National Accountability Bureau (NAB) laws after PTI Chairman Imran Khan challenged the amendments.

Berating Khan, the PML-N leader said that he was a "conspirator and not mentally fit".

"We are applauding our win over five seats, while the person who won 15 seats is crying," he added.

The minister further said that the by-elections proved that the Election Commission of Pakistan (ECP) and the establishment are neutral.

The railway minister demanded that the verdict regarding the PTI's foreign funding case, pending for years, should be announced soon.

On the other hand, JUI-F leader Akram Khan Durrani said that Khan attacks the ECP, and the judiciary, and was constantly humiliating the institutions.

"If he [Imran Khan] does not stop, the law will take its course," said Durrani.

According to sources, during the meeting, the coalition government decided that early elections are not a good option.

The parties also decided to make efforts to save the chief ministership in Punjab, said the sources.