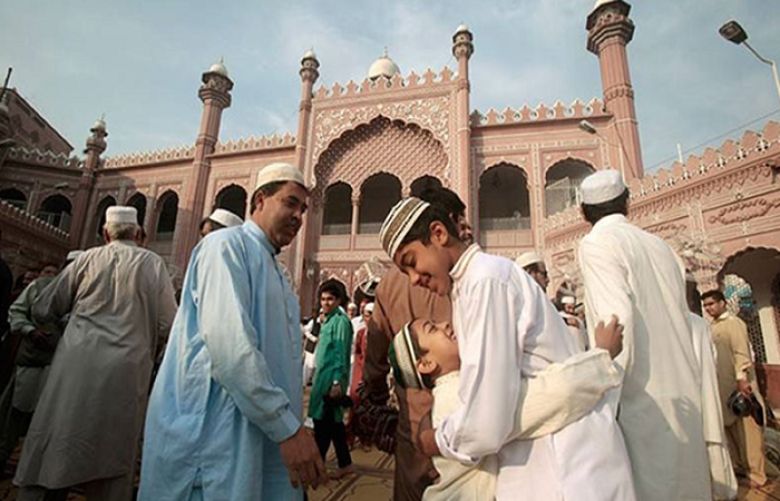 Pakistanis are celebrating Eid ul Adha today (Sunday) with religious zeal and fervour, as the country continues to report a steady rise in COVID-19 cases - mostly being attributed to the sub-variants of Omicron.

While celebrations are in full swing, several parts of the country are recovering from the damage of this weeks rains.

The day dawned with special prayers in mosques for the well-being of the Muslim Ummah and progress, prosperity and security of the country.

Eid prayers’ congregations were held at mosques, Eidgahs and open places in all cities, towns and villages.

Ulema, in their sermons of Eid, highlighted the significance of the philosophy of the sacrifice offered by Hazrat Ibrahim (AS) and Hazrat Ismael (AS).

People are offering the sacrifice of animals to follow the sunnah of Hazrat Ibrahim (AS).

In his message to the nation on Eid ul Adha, Prime Minister Shehbaz Sharif said the real meaning of sacrifice is obedience and submission to Allah. "Allah sees the intention of His obedient people and on that basis gives the reward," he said.

He noted that Muslims can fulfill their obligation during the special occasion of Eid ul Adha by helping out orphans, widows, needy and the poor.

“We should share the happiness of Eid with the needy and deprived around us, who are affected by the wave of international inflation," the premier said.

”We should also not forget those affected by the recent floods and rains and fully help them in this hour of need. It is our duty to support them and share their grief."

He said the young generation can learn a lot from the meaning of sacrifice during Eid.

The PM called upon the youth to become a living example of tolerance, patience, selflessness and sacrifice in society.

He appealed to the public to strictly follow precautionary measures against the coronavirus pandemic.

He directed the district administrations and departments concerned to carry out their responsibilities efficiently, timely dispose of animal waste and ensure cleanliness.

In a message, he said: "I pray to Allah Almighty to accept the Ibadah, Hajj and sacrifices of the Pakistani nation and the Muslim Ummah. Amen!”

He said Eid ul Adha reminds us of the submission and obedience of Hazrat Ibrahim (AS) and Hazrat Ismail (AS) before the command of Allah.

President Alvi stressed that the act of sacrifice reflects a believer’s determination that they are ever ready for the greatest sacrifice in the name of Allah.

Sacrifice is not merely an act of animal slaughter, but its real goal is to sacrifice personal desires for accomplishing a higher purpose, he noted.

This spirit of sacrifice grants such an ability to human beings that they keep following the righteous path despite the most trying circumstances, he added.

“As our dear country faces economic challenges, there is a dire need to effectively utilise this spirit of sacrifice," Dr Alvi said.

”On the occasion of Eid ul Adha, the entire Pakistani nation must reaffirm that instead of pursuing self-interest, greed, and avarice, we will inculcate the spirit of brotherhood, selflessness, love and empathy to help the needy and destitute around us so that we may emerge as a strong nation in these testing times," he added.