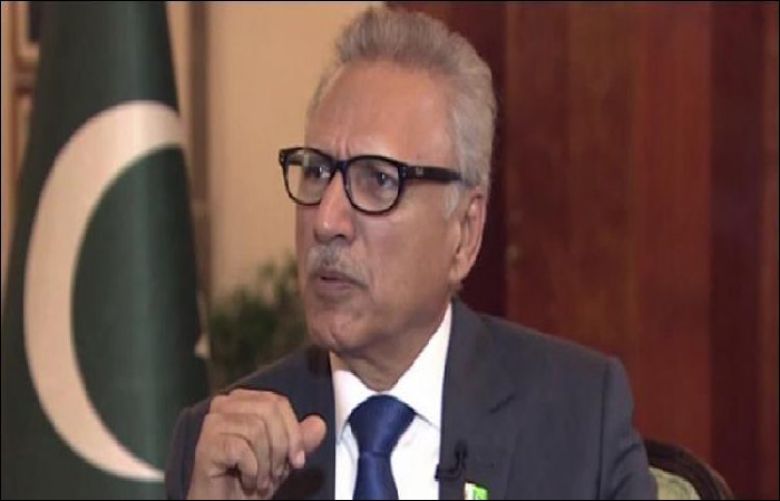 President Dr Arif Alvi on Sunday returned unsigned a bill seeking to reverse the controversial changes made in election laws by the previous PTI government regarding the use of electronic voting machines (EVMs) and i-voting for overseas Pakistanis, saying that the proposed reversals were "regressive" in nature.

The bill, along with the one on NAB amendments, was passed by the National Assembly and Senate last month. After its approval from both houses, only the president's assent was required for it to become law. However, Alvi sent back the bills, following which the government convened a joint sitting of the NA and Senate on June 9 to consider the bills, which were approved the same day.

Procedurally, after bills are passed by the joint sitting, they are presented to the president once again for his assent. If the president does not give his approval within 10 days, it will be deemed to have been given.

Despite that, Alvi sent back the elections reform bill today, unsigned.

In a statement issued by the President's Secretariat, Dr Alvi said that he had not signed the bill "despite the fact, that the Constitution that he upholds, will make it into law".

Elaborating on why he did not sign it, he said he had been pursuing the issues of EVMs and voting for overseas Pakistanis with all governments, in parliament and with the Supreme Court for over a decade.

Dr Alvi said that it had been "very painful" for him to not sign a bill passed by the Parliament and wanted to "record his reasons for posterity".

The President said that besides the proposed laws’ regressive nature that he pointed out in detail when he referred the bill back to Parliament, he strongly believes that technology today, especially with EVMs when used judiciously contains many solutions that reduce the impact of confusion, discord and accusations in our ‘ever-marred’ and challenged election processes," President's Secretariat stated.

"Technology can also improve transparency, make elections inclusive with the vote of our Overseas Pakistanis, build confidence and reduce polarisation to finally achieve our elusive dream of free and fair elections," it highlighted.

More than that, the statement continued, the president wanted Pakistan to "leapfrog into the world of tomorrow", and not just solve problems through the lens and experiences of yesterday but through newer and better scientific approaches that were available.

"He does understand that this cannot happen without confidence-building measures across the aisles, and broad stakeholder involvement. Why was this not done and why the obvious was not visible to the opinion and decision-makers will remain an enigma to him."

The president further observed that the present and future governments and parliaments would be facing two choices: "whether to allow the past to drag Pakistan down or allow the lessons from the past and technologies of today to boost us into the bright progressive and dynamic future of Pakistan that has been our dream."

"Many such decisions will continue to challenge us, and history shows that those who make the right decisions 'rise', and those who don't, squander opportunities that obstruct their path to glory," Dr Alvi added.