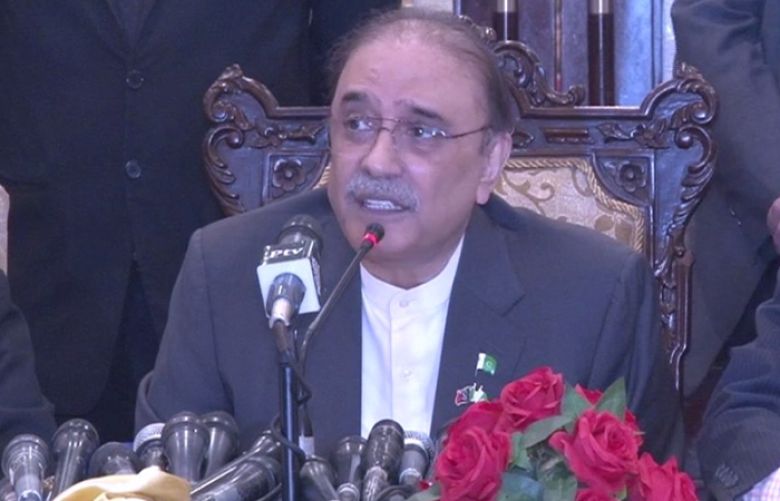 PPP co-chairman and former president Asif Ali Zardari on Saturday claimed that his party will form the next government in the Centre after winning the 2023 general elections.

“The next government (in the Centre) will be the PPP’s. I promise if I get a chance to return to power I will turn around Pakistan 110 degrees. The PPP has the capability to help the country negotiate all the challenges,” the former president said on Saturday during an interaction with the party’s office-bearers and workers at Bilawal House in Bahria Town here where he had directly reached from Nawabshah.

Regarding the party’s politics in Punjab, Mr Zardari dismissed the impression that the PPP had been wiped out from the province as well as Gilgit-Baltistan. “This is not true. The PPP has to sacrifice its politics to ‘save Pakistan’. I will myself look into the party affairs in Punjab and ensure its revival here,” he declared.

Zardari claimed the PPP, which is a part of the nine-party coalition government led by the PML-N in Punjab and Centre, would help steer the country out of the economic and political crises. He, however, did not mention contesting the next general elections with the PML-N unlike the agreement for the by-polls in Punjab next month. “We will strengthen our party in Punjab and ensure we get our fair share in the province,” he exclaimed.

Amid the slogans of “Aik Zardari sab pe bhari”, the PPP senior leader further said he would accord respect to the party workers and consult them in any future decisions. “Since it is very difficult for the workers to reach Bahria Town, which is far from the central city, I have decided to get a house in Gulberg (the city centre) for maintaining interaction with them,” he announced.

Zardari also took on ousted premier Imran Khan, saying the policies of the “anokha laadla” (a favourite of the powers that be) had caused price hike and inflation in the country.

In a reference to the PML-N, the former president said: “They (Sharifs) listen to us only when they need us.”

The former president later left for Nawabshah and is scheduled to return next week when he will hold meetings with the PML-N leadership regarding his party’s share in Punjab.

Earlier, the PPP Punjab chapter had complained to Mr Zardari that Chief Minister Hamza Shehbaz, the son of Prime Minister Shehbaz Sharif, was reluctant to give its lawmakers in the province their ‘agreed share’. The PPP has seven seats in the Punjab Assembly and they were reportedly promised four ministries and two adviserships by the Sharifs.

The PPP is interested in the portfolios of finance, and communication and works, but the PML-N circles believe such key seats should stay within the party. In the existing eight-member cabinet of Hamza, PPP has two members, but they remain inactive in meetings due to non-allocation of portfolios. Despite their induction to the cabinet over two weeks ago, not all members have been assigned portfolios. The PML-N leadership appears to be indecisive about the next phase of cabinet expansion.

Although the PML-N and PPP have agreed to jointly contest the next month’s by-polls on 20 provincial seats in Punjab against Imran Khan’s Pakistan Tehreek-i-Insaf (PTI), owing to ideological differences between the parties, their workers are yet to be seen in these constituencies canvassing for their joint candidates.

Hamza Shahbaz, who lost majority in the Punjab Assembly after the election commission de-seated 25 PTI lawmakers over defection in the election for the chief minister, is desperate to see the PML-N-PPP-backed candidates win the by-polls so he could retain his office.