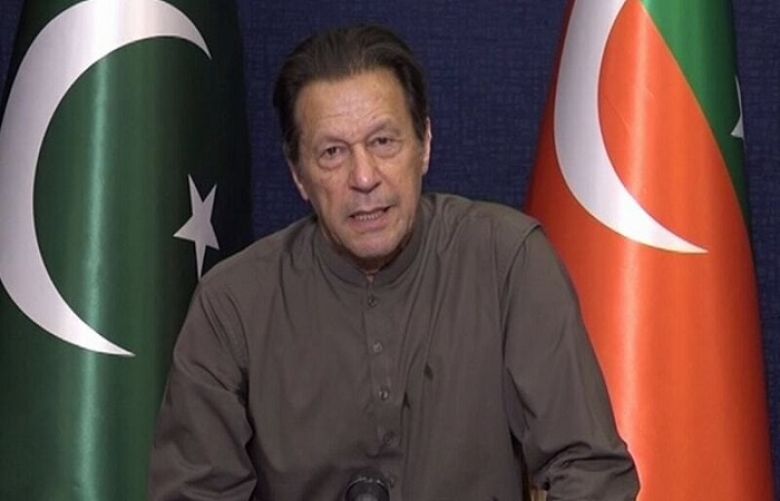 PTI Chairman and former prime minister Imran Khan on Thursday questioned why the current coalition government carried out a conspiracy to oust his party from power when it was clearly not ready to deal with the country's economy.

He made the remarks while talking about Pakistan's current economic situation, soon after the government unveiled the Pakistan Economic Survey (PES) 2021-22.

"If they (government) were not ready to economically stabilise the country, then what was the point of carrying out a conspiracy and ousting the government?

"If they are unable to take care of the country, of inflation and the economy, what was the hurry? You could have prepared and waited, the government had only a year-and-a-half remaining."

He reiterated that the current government was not concerned about Pakistan's well-being and was only concerned with getting rid of the corruption cases registered against them.

During his address, Imran also highlighted the achievements of the PTI government. He talked about the PTI's focus on creating dams in the country to solve Pakistan's water and energy issues.

He went on to say that the former PML-N government set up power plants that operated on imported fuel. When global prices soared, so did energy prices, he said, adding this also had an effect on foreign exchange.

He lamented that dams started by the PTI government were suffering as the credit rating of the Water and Power Development Authority (Wapda) had fallen, which meant that it was more difficult to take out loans.

"Our project for constructing dams is in danger. Money is required to construct them and we have no foreign exchange," he said. He also highlighted how Moody's, a credit rating agency, had downgraded Pakistan's outlook.

Talking about the PES, he said that it showed the PTI government's performance. However, the one thing it did not mention were the efforts we made to uplift the poorest segments of society, he added, talking about the Sehat Card, Kamyab Jawan Programme and Ehsaas Programme.

Touching on the Covid-19 pandemic, Imran said that at the start the then-opposition had called on him to impose a lockdown. "They criticised me and asked why I wasn't doing it [but] I knew that it would destroy our economy and that the common man would suffer."

"In three-and-a-half years, we raised petrol and diesel prices by Rs55 and Rs50, respectively. They came and increased prices by Rs60 in the span of 10 days."

The people will now find out what inflation truly is, he said. He once again highlighted how the PTI government withstood pressure from the International Monetary Fund (IMF), saying that the party's leadership was destined to live and die in Pakistan.

All of their assets are abroad, they don't have a stake in Pakistan, he said while lashing out at the government. "In my opinion, I don't think any other government has caused this much inflation in such a short amount of time in our history."

I don't know how a normal household will budget their needs, he said. "They used to cry about inflation but we think it will increase three-fold," he added.