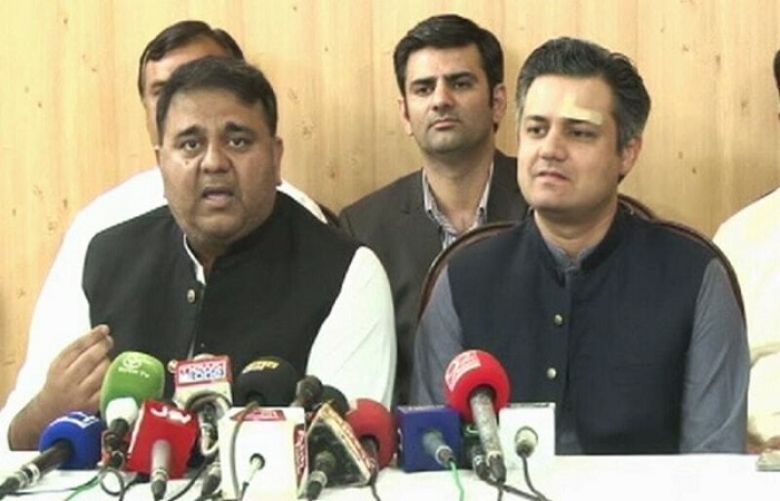 PTI leader Fawad Chaudhry said on Tuesday that the party did not have any intention of returning to the National Assembly, asserting that the incumbent speaker did not have the authority to review the resignations of party members after they had been accepted by the previous speaker.

Addressing a press conference in Islamabad alongside Hammad Azhar, he said that the party considered parliament to be "occupied".

"They have taken possession of the assembly and we don't have any intention of returning.

"We are of the opinion that the NA speaker has accepted the resignations of our lawmakers and this speaker does not have the authority to review [the decision]."

Meanwhile, party leader Farrukh Habib reiterated that PTI lawmakers had resigned from the lower house of parliament. "At the time, Qasim Suri had issued a notification accepting the resignations," he said.

"There is no need for further action," Habib said, alleging that the resignations were illegally being postponed.

PTI lawmakers had resigned en masse from NA on April 11, two days after former prime minister Imran Khan was ousted from the top office after the no-confidence motion moved by the joint opposition in the parliament against him succeeded. The resignations were accepted by the former acting speaker, Qasim Suri, and a notification to this effect was also issued by the NA secretariat.

However, a few days later on April 16, newly elected NA Speaker Raja Pervaiz Ashraf directed the NA secretariat to de-seal the resignations and present them to him so that he could verify these personally and deal with them in "accordance with the law". Subsequently, according to a senior official of the NA secretariat, the previous notification of approving the resignations should be taken “as it has not been issued at all”.

Finally, on Monday, NA Speaker Raja Pervez Ashraf summoned a group of PTI lawmakers to confirm the "voluntary character and genuineness" of their resignation letters.

According to a spokesman for the NA Secretariat, the speaker had decided to meet 30 MNAs to complete the process by June 10 — the day the new coalition government is set to present the budget for the next fiscal year. The speaker has allocated five minutes for each member.

During today's press conference, Fawad also lashed out at the government for the thuggery against PTI protesters leading up to and during its May 25 Azadi March. He maintained that the party was compiling a video of the brutality and would raise the issue at the international level.

"We are also filing criminal complaints in Pakistan," he said, adding that such violence was not even carried out in dictatorships. Fawad said that the videos would then be sent to international human rights commissions.

He also took exception to Interior Minister Rana Sanaullah's press conference from earlier today, saying: "If you close your eyes and listen to him, it seems as though Altaf Hussain is speaking."

He alleged that the government fired at unarmed protesters, including women, and was now trying to manipulate the narrative. He maintained that the PTI allowed political parties to stage protests during their tenure, adding that Imran directed authorities to provide the protesters with facilities.

He also questioned why the Supreme Court was not constituting a commission to probe the "regime change conspiracy", noting that President Dr Arif Alvi had also written to Chief Justice of Pakistan (CJP) Umar Ata Bandial in this regard.