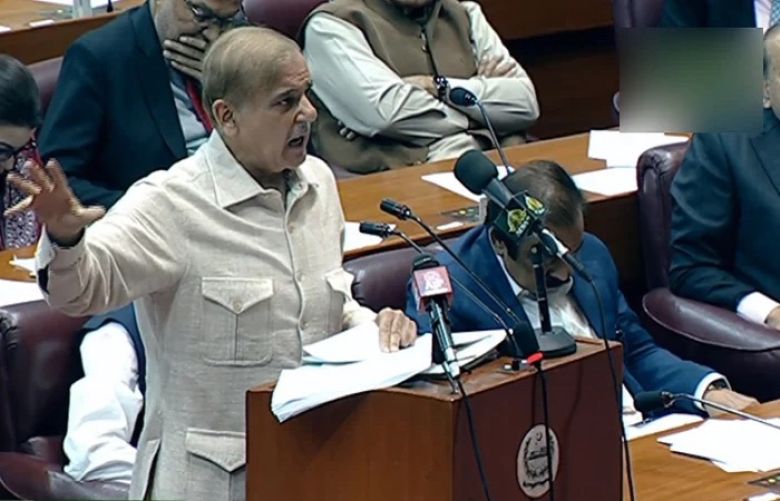 Prime Minister Shehbaz Sharif Thursday reprimanded ex-premier and PTI Chairman Imran Khan for creating chaos across the country's major cities, noting that there was no space for "fitna" and "fasad" when the government was working hard to revive the economy.

PM Shehbaz asked the NA Speaker whether any party or mob be given the right to rebel against the Constitution of Pakistan by taking stones and sticks in their hands.

He said that when the incumbent govt took office, it had two targets in front of it: holding free and fair elections and reviving the drowning economy of Pakistan.

The premier praised the NA and its members for passing the bill.

"NA has laid the foundation of free and fair elections by passing this bill," PM Shehbaz Sharif said.

"Is there any room for fitna, fasad or anarchy when I and my team are working hard to fix the economy ruined by the former government," he asked.

PM Shehbaz Sharif said that China is one of the best friends of Pakistan.

Referring to PTI's 2014 sit-ins in the Capital city, the prime minister said that PTI Chairman Imran Khan refused to vacate the place when the Chinese president had to visit Pakistan. Due to this the visit had to be postponed, he added.

He condemned the “way institutions and judiciary is being defamed.”

PM Shehbaz Sharif said that the former prime minister started speaking ill of the same chief justice who he had praised earlier when the judge issued orders against him.

The premier said that he is sad that he has to cite India as an example here.

“Pakistan was ahead of India in some regard and India was ahead of Pakistan in another. There was a competition between the two countries."

He said that it is irrefutable evidence that Pakistani Rupee’s value was higher than the Indian currency in the 90s decade.

"Pakistan’s economy was freed and India copied us."