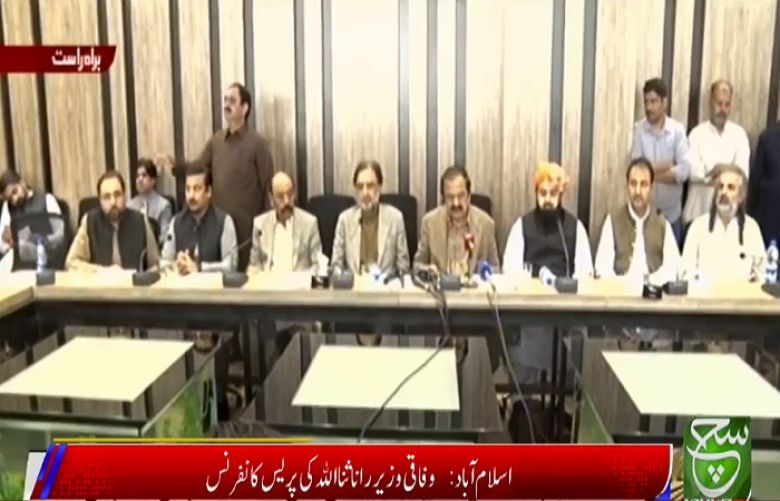 Interior Minister Rana Sanaullah announced on Tuesday that the federal cabinet had decided it would not allow the PTI to hold its planned long march to the capital, which is due to take place on May 25 (tomorrow).

Addressing a press conference in Islamabad, he said the government would not allow the PTI to spread "chaos and disorder" in the guise of the march. "They will be stopped so they cannot propagate their misleading agenda."

"These people (PTI) have moved from abuses to bullets. A police constable was killed in Lahore."

He was referring to Constable Kamal Ahmad who was gunned down last night during a police raid in Lahore's Model Town.

The interior minister claimed that the PTI leadership had gathered in Khyber Pakhtunkhwa and was planning to use the province's resources and personnel to "come and attack the federation".

"They want to come as a mob that has no legal or constitutional status ... this cannot be allowed."

Former prime minister and PTI Chairman Imran Khan wanted to divide the nation, he added. "Don't be misled by Imran Khan. He directed his party members during rallies to call people from other parties robbers and traitors. This is how he wants to spread chaos and disorder."

Sanaullah said everyone had the right of freedom of expression and peaceful protest, however, the PTI did not want a peaceful protest. "Had they not called it a march and talked about spreading anarchy, we would not have stopped them."

He vowed to protect the lives and properties of the capital's people "at all costs".

Meanwhile, the federal government as well as the governments of Sindh and Punjab decided to impose a ban on gatherings under Section 144 (power to issue order absolute at once in urgent cases of nuisance or apprehended danger) of the Code of Criminal Procedure.

In an order issued earlier today, Islamabad Capital Territory Additional District Magistrate Rana Mohammad Waqas Anwar stated that certain segments of the society were planning demonstrations and processions in the city which could "disrupt public peace, tranquility and maintenance of law and order situation".

The order, said that the gatherings could pose a "threat to public property, and may lead to a riot or an affray including sectarian riot within the revenue/territorial limits of district Islamabad".

Subsequently, all kinds of gatherings of five or more persons, processions and rallies and demonstrations at any public place within the Revenue Limits of District Islamabad were prohibited for two months, it added.

Separately, a notification issued by the Sindh Home Department stated that the province's inspector general of police had informed authorities that some political and disgruntled elements were planning to trigger the acts of "unlawful assembly" with the intent to "block roads, highways and organisation of sit-ins" disturbing the the smooth and peaceful pace of life of the citizens of province.

"It has also been pointed out that these will further provide an opportunity to anti-social and anti-state elements trying to take any advantage through exploiting the prevalent politico-economic situation.

"Therefore, the Sindh government, in exercise of power under Section 144 of the Code of Criminal Procedure, does hereby imposes ban on assemblage/gatherings of five or more people, staging of demonstrations and rallies across the province for a period of 30 days with immediate effect."

It added that the station house officers of concerned police stations were authorised to register complaints under Section 188 of the Pakistan Penal Code for the violation of the order.

Earlier today, PML-N Deputy Secretary General Attaullah Tarar told a press conference in Lahore that Section 144 was being imposed in the province, adding that the government had taken the decision after consulting with its allies.