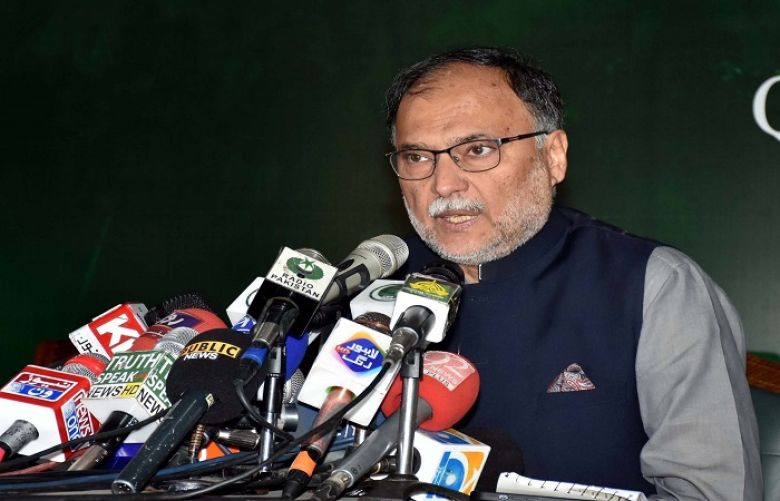 Speaking at an event in Lahore, Iqbal excoriated the PTI chairman for allegedly creating distrust between institutions and defaming their leadership. "Creating discord, chaos and internal implosion are all tools used by enemy states during a hybrid war.

"If you look at Imran's politics, you will see that he is also using tools of hybrid warfare against Pakistan," Iqbal said.

Since 2014, the PML-N leader continued, the former premier had indulged in politics of hatred and instigation. "He is spreading polarisation in the country and is trying to create differences between the public and the leaders."

Iqbal also asserted that Imran's politics was not only objectionable but also hurt the sovereignty and integrity of the country. "His politics is unacceptable in a country which is an atomic power."

Pakistan was an atomic power and capable of protecting its freedom, Iqbal added, contending that no one could compromise the country's independence. "These things Imran says in his jalsas about slavery are just ways to brainwash the youth."

But the government won't let the PTI chairman fulfill his "political agenda", he vowed. "Let me tell you this today. We won't let you use anarchy. No matter what," Iqbal stressed.

Meanwhile, commenting on PTI's upcoming Azadi March, the minister said that the government believed in democracy and respected the right to protest. "Whatever Imran Khan does within the boundaries of the law and Constitution will be accepted."

However, the minister warned, that if the law was violated, then the government would find ways in the Constitution to deal with the protesters.

Yesterday, Imran Khan announced that PTI's march on Islamabad would be held on May 25. Addressing a press conference after his party's core committee meeting in Peshawar, the former prime minister had said the main demands for the march to the capital were the immediate dissolution of the National Assembly and a date for the next general election.

"On the 25th [of May] I will meet you in Islamabad on the Srinagar Highway," Imran said addressing his supporters and party workers. "You have to reach there at 3pm."

The PTI chairman had also indicated that the march would convert into a sit-in and continue until his demands were accepted. "No matter how long we have to remain in Islamabad we will remain there."