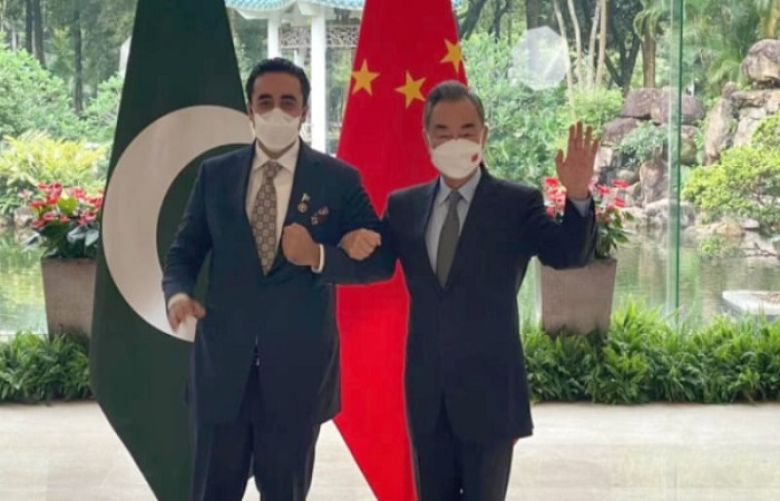 Foreign Minister Bilawal Bhutto-Zardari on Sunday held a meeting with Chinese State Councillor and Foreign Minister Wang Yi in Guangzhou, after his arrival in China on his first bilateral visit at Wang's invitation.

According to the PPP's Media Cell, Bilawal was holding talks with his counterpart. Minister of State for Foreign Affairs Hina Rabbani Khar was also present.

Yesterday, the foreign minister said his visit coincided with the 71st anniversary of the establishment of Pakistan's diplomatic ties with China.

“Landed in Guangzhou, China on my first bilateral visit. Today also marks 71st anniversary of establishment of diplomatic ties between Pakistan and China. Looking forward to meeting Chinese State Councilor and Foreign Minister Wang Yi for in-depth discussions on Pakistan-China relations,” he tweeted after arriving in the Southern Chinese city which is also largest city and capital of China’s Guangdong province.

The minister left for the two-day visit to the neighbouring country on Saturday which is the first in-person high-level interaction between the two countries since the establishment of the coalition government in April.

This is Bilawal’s first bilateral visit as foreign minister to a foreign country after he took up the post in April.

Extensive consultations were set to be held with his Chinese counterpart, during which the entire gamut of bilateral relations will be reviewed, with particular focus on stronger trade and economic cooperation between Pakistan and China.

"Fast-tracked progress on the transformational China-Pakistan Economic Corridor (CPEC), a flagship project of President Xi Jinping’s visionary Belt and Road Initiative, will feature in the discussions," the statement said.

The two sides will also have wide-ranging exchange of views on major regional and international issues, it added.

According to the Chinese state-affiliated Global Times, the foreign minister’s visit is a part of the high-level exchanges between China and Pakistan, which recently also included the message of felicitations to Prime Minister Shehbaz Sharif from Chinese Premier Li Keqiang, and a telephonic conversation between the two leaders on May 16, 2022.

Meanwhile, Chinese Foreign Ministry Spokesperson, Wang Wenbin said that as all-weather strategic cooperative partners, it was necessary for China and Pakistan to improve communication and coordination on major issues to deal with changes in the region and risks and challenges.

"China hopes to use this visit as an opportunity to carry on with the traditional friendship with Pakistan, consolidate strategic mutual trust, and further deepen the all-weather comprehensive strategic partnership to build a closer China-Pakistan community with a shared future," the spokesperson added.