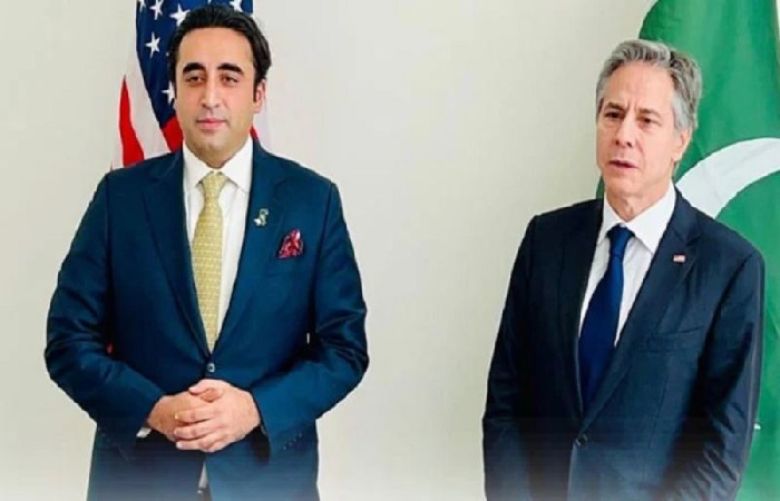 Foreign Minister Bilawal Bhutto-Zardari said he emphasised to US Secretary of State Antony Blinken in a meeting that Pakistan prefers trade over aid.

FM Bilawal Bhutto is currently in New York on a two-day official visit to the US during which he held also meetings with UNSG Antonio Guterres and other international leaders.

A day earlier, Bilawal reached New York and met US Secretary of State Antony Blinken at the United Nations (UN) Headquarters, and later he attended the ministerial meeting on the "Global Food Security Call to Action."

During an exclusive interview, Bilawal Bhutto said it’s a moment of pride for him to represent Pakistan at the UN.

“I am feeling proud to represent my country, Pakistan is engaging with the world and its narrative is being presented to the international community,” he added.

Speaking about his participation in the food security meeting, he said, “food security and water crisis are big issues of the country.”

Disclosing the details of the meeting with US Secretary of State Antony Blinken, FM Bilawal Bhutto said, “we have emphasised that Pakistan believed in trade over aid, and we received an encouraging response from him.”

“We want to see growing ties between businessmen, entrepreneurs and business communities of both countries, so it can benefit our economy,” he added.

On a question about following his mother and grandfather in representing Pakistan at the international forums, Bilawal said, “I would not claim to be able to fill the shoes of Zulfiqar Ali Bhutto and Benazir Bhutto as their legacy and roles are historic.”

“However, we will try to work hard to represent the wishes, demands and hopes of the new generation of Pakistan around the world,” said Bilawal.

FM Bilawal further went on to say that the new generation of Pakistan has such potential that we can achieve a lot if we work hard together.