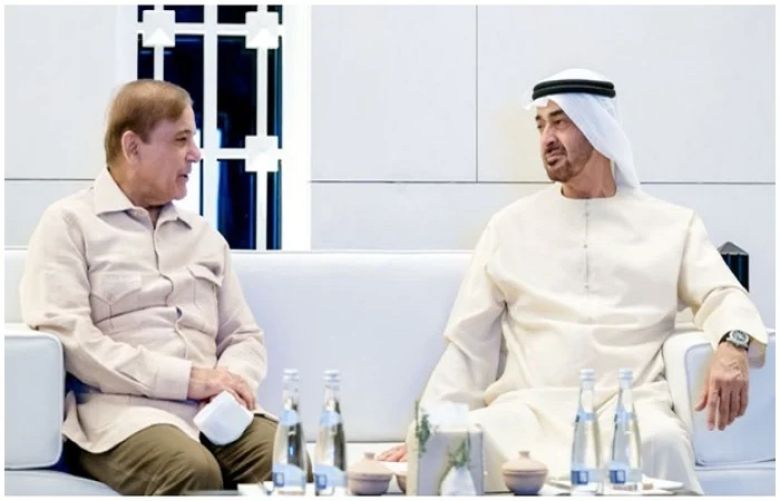 The premier met the crown prince in Abu Dhabi during his brief stay in the state after concluding his three-day visit to Saudi Arabia.

PM Shehbaz Sharif had a warm welcome at Abu Dhabi by the crown prince and Deputy Supreme Commander of UAE Armed Forces ahead of their meeting at Royal Palace, Qasr-e Al-Shatie.

During the meeting, the crown prince congratulated PM Shehbaz Sharif on his election as the premier of Pakistan and wished him great success serving the post. He also extended best wishes for the continued progress and prosperity of the people of Pakistan.

The prime minister paid tributes to the founder and first president of the UAE, His Highness Sheikh Zayed bin Sultan Al Nahyan (may Allah bless his soul) for his foresight and visionary leadership and his contribution to laying the foundation of Pakistan-UAE friendship. He expressed Pakistan's determination to strengthen mutually beneficial ties under the vision of Sheikh Zayed bin Sultan Al Nahyan.

Noting the first 50 years of fast-track and remarkable development of the UAE, PM Shehbaz Sharif congratulated the UAE leadership and people and wished them more success in the decades ahead.

He also felicitated the UAE leadership and Expo Team on successful holding of the Dubai World Expo 2020, widely acclaimed as a resounding success.

Moreover, the prime minister expressed gratitude to the UAE for its long-standing support to Pakistan both bilaterally and multilaterally.

He, in particular, mentioned the humanitarian projects launched under the UAE-Pakistan Assistance Program in Pakistan as well as crucial support extended by the UAE during the COVID-19 pandemic. He also thanked the UAE for hosting 1.7 million Pakistanis with honour and dignity who are not only a bridge between Pakistan and the UAE but also pride of Pakistan.

'Pakistan, UAE stood by each other': Prince Mohammed Bin Zayed
​

The crown prince assured the PM Shehbaz Sharif about making effective moves towards strengthening closer bilateral fraternal ties for the benefit of future generations of the two countries. He acknowledged with gratitude the constructive role played by Pakistanis in the development of the UAE when others had limited presence and contribution.

Prince Mohammed Bin Zayed Al Nahyan said that Pakistan and the UAE stood with each other during good or bad times and would continue to extend support to each other in the future. He emphasised the importance of strengthening bridges between the two brotherly nations for the well-being of their people.

The two leaders also discussed issues of regional and international importance. They decided to remain in regular contact on all issues of mutual interest as well as coordinate positions at multilateral forums including the UN and the OIC.