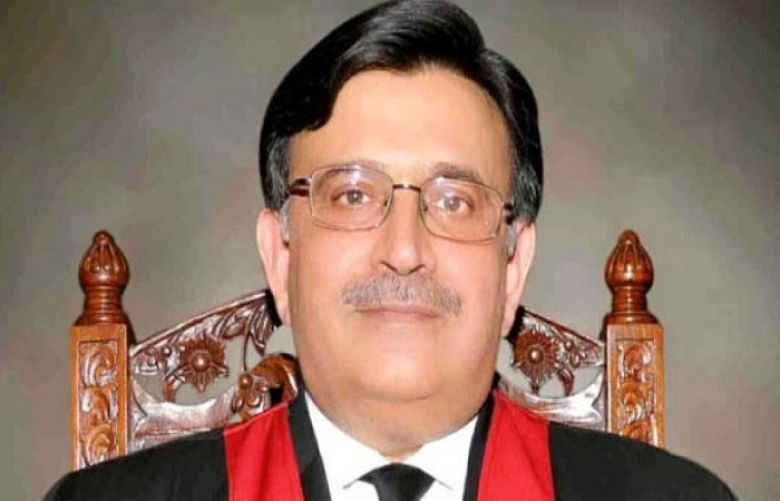 Chief Justice of Pakistan Umar Ata Bandial observed on Wednesday that the main aim of Article 63 (A) is to ensure a lawmaker’s “loyalty” to their party.

CJP Bandial passed the remarks during a hearing on the presidential reference seeking the interpretation of Article 63A of the Constitution of Pakistan. A larger bench of the apex court, headed by CJP Umar Ata Bandial, including Justice Munib Akhtar, Justice Ijaz Ul Ahsan, Justice Mazhar Alam Khan, and Justice Jamal Khan Mandokhel, heard the reference.

In today’s hearing, PPP's counsel Farooq Naek presented his arguments before the bench.

At the onset of the hearing, Naek explained to the bench that the 13th amendment was used to Abolish Article 58 2(B) but was restored by former dictator General (retd) Pervaiz Musharraf in 2002 via a Legal Framework Order.

Naek explained to the court that under the 14th amendment, a party chairman was authorised with a lot of powers. The Election Commission of Pakistan (ECP) was not given the right to dismiss a decision made by the party chief, he added.

“Now, the ECP has the right to confirm the party chief's declaration if a lawmaker defects. The word disqualification was not used in any of the amendments made in Article 63(A),” said Naek.

The PPP’s counsel also explained to the court that the legislature retains the right to disqualify a member from Parliament and has not given the powers to the executive or the judiciary.

“In the 18th amendment, ECP has the right to decide on an Article 63(A) reference,” said Naek. He added that the presidential reference submitted before the court was not against Article 63(A).

“The presidential reference only relates to sub-section 4 of Article 63(A),” said Naek.

At this point, Justice Ijaz Ul Ahsan interjected and told the lawyer that Article 62 (1)(F) does not have a period for disqualification or un-seating. He also added that the Supreme court has interpreted the specific article.

To this, Naek told the judge that the lawmakers have not “determined disqualification” for a dissident legislator in Article 63(A).

At this point, CJP Bandial interjected to tell the PPP’s legal counsel that Article 63 (A) has made loyalty to one's party subject to the party's policy on four occasions. He also added that the then attorney general Khalid Jawed Khan was told by the court that the article is “related to party loyalty”.

“Loyalty is the basic constitutional principle. Article 5 states that every party member must be loyal to the state,” observed CJP Bandial.

The top judge also remarked that “disqualification” was a “normal thing” and that Article 63(A)’s main “aim is to ensure loyalty towards the party”.

“We have to look at the Constitution as a whole,” said CJP Bandial.

While Justice Ahsan observed that a lawmaker takes oath as a member of a party and is bound by those policies.