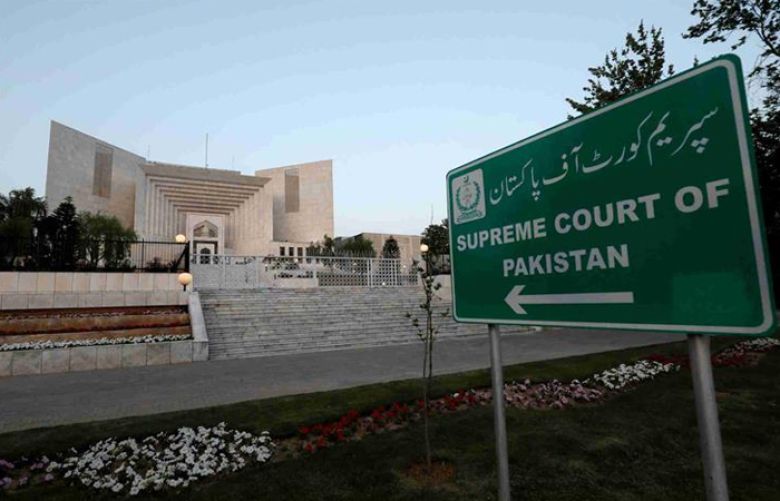 The Supreme Court of Pakistan on April 6 (Wednesday) will resume the hearing on suo moto notice over political situation of the country arising after Deputy Speaker rejected no-confidence motion against Prime Minister Imran Khan.

A five-member larger bench of the apex court headed by Chief Justice Umer Atta Bandial will resume the hearing of the case in federal capital.

During the hearing on Tuesday, PPP counsel Senator Raza Rabbani said that this is a civilian coup. A stance was created through an alleged cable which is based on malafide intent, the Senator said, adding that the no-confidence motion against the prime minister was tabled on March 28 but the NA session was adjourned.

He maintained that NA Deputy Speaker Suri gave the ruling without putting the documents before the parliament on Sunday. He argued that Rule 28 says the deputy speaker cannot give a ruling even if he has the authority.

"Deputy Speaker’s ruling is illegal and no-trust motion cannot be rejected without voting on it," Rabbani said. He further stated that the deputy speaker’s ruling doesn’t have constitutional security under Article 69.

Rabbani concluded saying that they want that the arguments completed and the court issues a brief order today.

As per the rules, the counsel pointed out, a debate on the no-trust move was supposed to be conducted on March 31. "But a debate was not held," he said, adding that voting was also not conducted on April 3.

He noted that according to the no-confidence motion, the prime minister had lost the confidence of the majority of the National Assembly. "Shehbaz Sharif had submitted the motion as per the rules of business," he said, adding that the NA session was adjourned till April 3 without conducting any proceedings, he said.

Here, the CJP asked how the session was adjourned and inquired if anyone had shown up from the speaker’s side. The court then summoned the record of the speaker and of the NA session held on April 3.

The PML-N’s counsel also said that the deputy speaker did not give the opposition a chance to speak during the session held on April 3 and gave the floor to the former information minister.