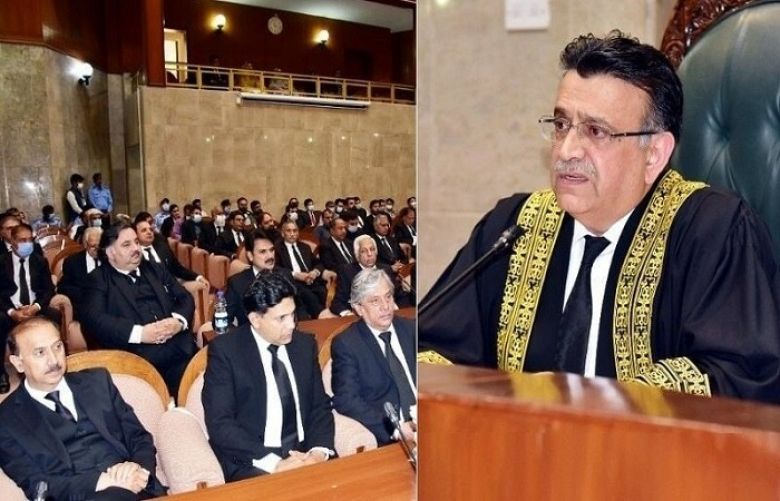 Chief Justice of Pakistan (CJP) Umar Ata Bandial on Friday took exception to "unnecessary" criticism directed at him, saying the prerogative to constitute benches historically lay with the chief justice.

He made these remarks at a full court reference held to bid farewell to Justice Qazi Amin Ahmed of the Supreme Court.

Justice Bandial said the chief justice had been forming benches for the last 20 years. "Why are objections raised without any reason?"

He said it is the chief justice who decides which case will be fixed for hearing and which bench will take it up. "If someone has an objection, come and talk to me."

He went on to say that judges must not be targeted on the basis of hearsay since they cannot respond to criticism. "One can criticise judgments, but not judges."

The statement from the top judge comes two days after his colleague and the senior most judge on the SC after him, Justice Qazi Faez Isa, wrote a three-page letter to the CJP, questioning the formation of benches without incorporating senior judges.

In his letter,  Justice Isa had pointed out that the composition of the five-judge bench that is hearing a presidential reference on Article 63(A) of the Constitution consisted of judges who were 4th, 8th and 13th in the seniority list of the court.

"This has been done by discarding the good practice of structuring the CJP’s discretion by predecessors of constituting benches consisting of senior-most judges when cases involved important constitutional questions," he had said.

"There is no discernible criterion in the constitution of the present bench," the letter said, adding that this was "most troubling and gave rise to unnecessary and avoidable misgivings".

The Constitution recognises the most senior judge of the apex court and with seniority comes responsibility, which must not be shirked, the letter said, adding that the senior-most judge also ensures continuity of the Supreme Court as an institution, but this practice has been discarded, which may have an adverse consequence for the institution.

Before the CJP, Supreme Court Bar Association (SCBA) President Ahsan Bhoon addressed the gathering and said the principles of meaningful and purposeful appointments to the top court should be formulated.

He observed that qualified lawyers like Justice Qazi Amin should be appointed as judges of the Supreme Court.

He also noted that Justice Qazi Faez Isa is a symbol of dignity for the judiciary.

"The letter written by Justice Isa gives the impression of division in the judiciary," said the SCBA president, adding: "I hope the chief justice will create an atmosphere of unity on the issue."

Bhoon also hoped that the judiciary under the current chief justice would rise and its supremacy would be established.

In his address, SCBA Vice President Chaudhry Hafeez said the decision of Justice Qazi Amin in the case of Justice Isa had raised concerns in the bar.

He said some judgments of Justice Amin in criminal cases were considered contrary to the Constitution.

Without naming anyone, the SCBA representative said some judges acted like civil servants.

He went on to say that some parties were not given a fair chance of hearing at the top court. "For many years, cases are not fixed in the Supreme Court and they eventually become ineffective," he added.

He warned that the institution would suffer "irreparable damage" due to division within judges in the wake of the current situation.

Hafeez said all eyes were on the Supreme Court, adding that the apex court must take decisions that upheld the supremacy of the Constitution.

During his remarks today at the full-court reference, Justice Bandial also maintained that judges in the Supreme Court were very competent and professional.

He was of the view that judges took decisions on the basis of their conscience. "We are all accountable to Allah, whatever is said in public is only for the media. Judges cannot be targeted without proof."

Justice Bandial said the registrar of the Supreme Court had complete understanding of the law and administrative affairs. "Do you want me to do administrative work too?" he asked, purportedly responding to criticism of the apex court's registrar's appointment and his handling of administrative matters.

He also called upon critics [of the judiciary] to talk about "useful knowledge" and shun criticism of judges.