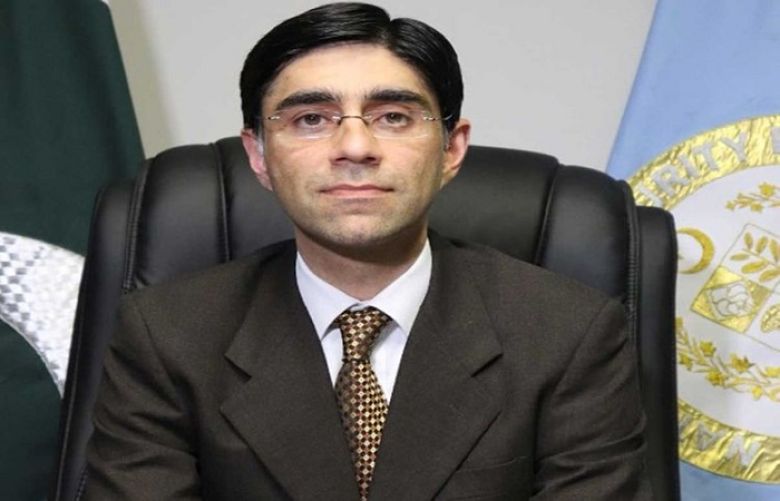 Dr Moeed was speaking at the Institute of Regional Studies (IRS) at an event to discuss the recently unveiled National Security Policy (NSP).

The NSP, according to Dr Moeed, is an overall policy document outlining national security policy direction. He noted that the policy prioritised citizen security in order to maintain national security. He went on to say that if the influx of resources was less than the outflow, the security of the average person of the country would be jeopardised.

According to the National Security Adviser, the NSP's main goal was to increase the national resource pie and divert attention away from the guns vs. butter debate.

He insisted that securing Pakistan's economic security could only be achieved by utilising the country's geo-economic location for trade connectivity and establishing true development ties with other countries across the world rather than relying on foreign aid.

He acknowledged that the NSP had set lofty goals in a challenging regional security situation in which both of its western neighbours were sanctioned by the international community, while the eastern neighbour refused to engage effectively. He went on to say, however, that the goal of any strategy is to find a way out of any current national and international limits.

Senator Mushahid Hussain Sayed, the Chairperson of the Senate Committee on Defence, said the NSP has offered a conceptual framework for the direction of national security in the days and years ahead. He went on to say that more clarity on the policy, political ownership through Parliament, and consistency might help it get implemented. He used the examples of Pakistan's nuclear strategy and the China-Pakistan Economic Corridor to emphasise the significance of policy consistency for policy effectiveness under different governments.