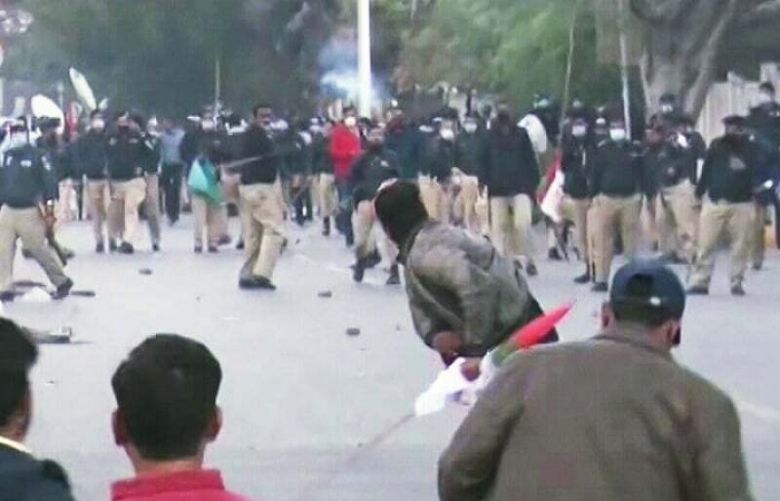 The protesters, including lawmakers, women and children, set out from FTC Roundabout on Sharea Faisal and eventually reached the CM House where they staged a sit-in.

South Zone DIG Sharjeel Kharal said that the party leadership had violated an "agreement" between the two that the protest would be restricted to the Karachi Press Club (KPC).

"They also blocked main Sharea Faisal at FTC for a considerable period of time causing a traffic jam. When they reached near Metropole hotel on Club Road, the MQM-P protestors allegedly attacked police with stones after officials tried to prevent them from holding a rally in the Red Zone," he said.

The official said that the protesters moved towards the chief minister's house in groups and staged a sit-in for an hour-and-a-half. The DIG said that he as well as the Karachi commissioner, Deputy commissioner South and SSP South held talks with the MQM-P leadership in an effort to get them to disperse but they refused to do so.

“Finally, police moved to clear the road as there were apprehensions of a security breach at the chief minister’s secretariat,” he said. “Police resorted to tear gas shelling and detained eight persons,” Kharal added.

The officer said that one MPA, identified as Sadaqat Hussain, was also among the detained persons as he allegedly attacked police and subsequently suffered "minor" injuries on the head. He was shifted to Jinnah Postgraduate Medical Centre (JPMC) for treatment.

A senior police officer said that police officials held talks with the MQM-P leadership and tried to persuade them to head towards the press club as the CM House was located in a Red Zone where such activities are not allowed.

The officer claimed that the MQM-P leadership did not listen, which prompted police to take action in the form of tear gas shelling and baton-charge.

Meanwhile, the MQM-P said that police restored to tear gas shelling and baton-charge against "women and members of the Sindh and National Assembly. “The MQM-P’s elected lawmakers were injured and arrested," the party said in a statement.

It added that MPA Sadaqat Hussain was injured during the police action and had been detained. "Several lawmakers and workers were taken to undisclosed places," the party said. In a video being widely shared on social media, three policemen are seen dragging Hussain on the road.

The party dubbed the Sindh government as "fascist" and accused police of attacking the "peaceful protest" on the orders of the provincial chief minister and the PPP leadership.

He also called for the "immediate intervention" of the federal government, urging it to seek an explanation from the provincial police chief regarding the "torture of women and children".