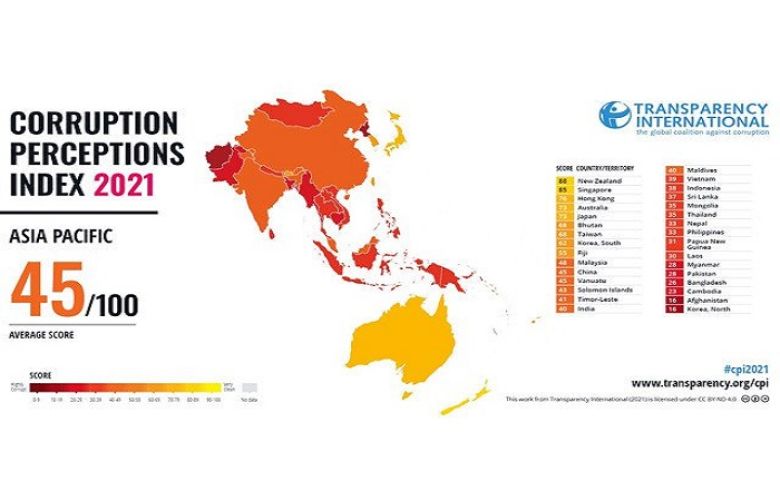 In a major blow to the Pakistan Tehreek-e-Insaf's (PTI) accountability narrative, Transparency International, a global corruption watchdog, has placed Pakistan at the 140th position out of 180 countries on its Corruption Perception Index (CPI) for 2021.

The CPI is an index published annually by the global watchdog, which ranks countries "by their perceived levels of public sector corruption, as determined by expert assessments and opinion surveys."

The PTI that came to power with a slogan to eradicate corruption has seen the graft level surge throughout the country during its three-year rule.

As per the TI website, a "country’s score is the perceived level of public sector corruption on a scale of 0-100, where 0 means highly corrupt and 100 means very clean".

In a statement, Transparency International-Pakistan Vice-Chair Nasira Iqbal said the absence of rule of law and state capture was a reason for a substantial low score for Pakistan on the CPI.

Over 68pc countries below average score

The corruption watchdog in its report said: "Overall, the CPI shows that control of corruption has stagnated or worsened in 86 per cent of countries over the last decade."

According to the TI, 131 countries made no significant progress against corruption over the last decade. "This year 27 countries are at a historic low in their CPI score," it said linking the rise in corruption to a spike in human rights abuses and the weakening of democracy across the world.

"This is no coincidence...ensuring basic rights and freedoms means there is less space for corruption to go unchallenged."

It said as per the recent index, the states with "well-protected civil and political liberties generally control corruption better".

"The fundamental freedoms of association and expression are crucial in the fight for a world free of corruption."