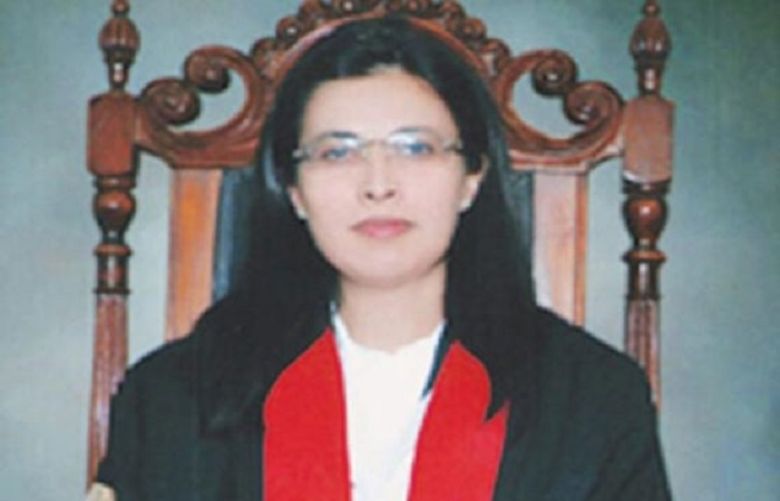 Lahore High Court's (LHC) Justice Ayesha A. Malik was notified as a judge of the Supreme Court (SC) of Pakistan on Friday, officially becoming Pakistan's first-ever woman judge to be green lighted to sit on the apex court.

According to a notification issued by the law ministry, her appointment has been approved by President Arif Alvi and will come into effect as soon as she takes oath of office.

The development comes two days after the Parlia­­mentary Committee on the Appointment of Superior Judiciary approved the appointment of Justice Malik as a judge of the SC.

For months, Justice Malik’s elevation to the SC was debated as many said it went against the principle of seniority since she is the fourth most senior judge of the LHC.

Those in favour of her elevation pointed out that seniority was not a requirement for appointment to the apex court according to the Constitution and that the country’s judicial history is full of instances of male judges from provincial high courts being elevated without consideration to seniority.

After the parliamentary committee approved her appointment, Senator Farooq H. Naek, who heads the body, had said the committee still believed in the principle of seniority for appointment of judges, but the approval for Justice Malik was given because it was the first time a woman was being elevated to the apex court.

"We have approved Justice Malik's name in national interest," the senator had said.

The Judicial Commission of Pakistan (JCP) had earlier this month approved Justice Malik for elevation to the apex court by a majority of five to four during a heated session that had lasted nearly three-and-a-half hours.

This was the second time that the JCP held a meeting to decide on Justice Malik's appointment. A lack of consensus during an extended meeting of the JCP on Sept 9 last year had forced the commission to defer a decision on her appointment.