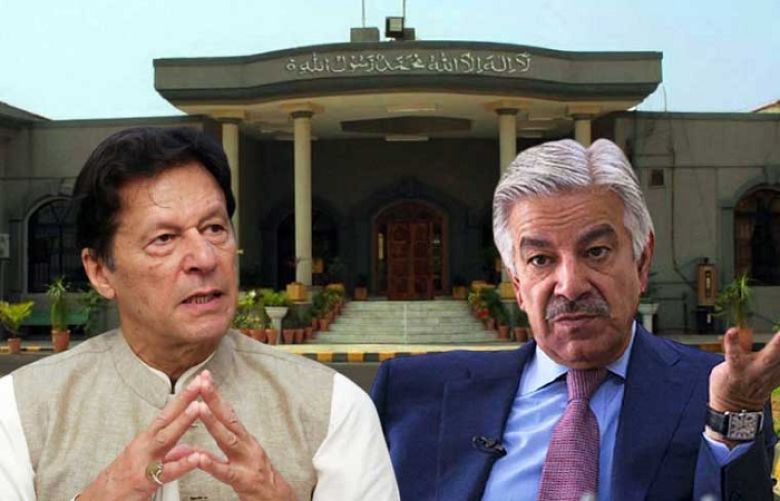 The Islamabad High Court accepted on Thursday Khawaja Asif's petition challenging the decision to disallow the right to cross-examine Prime Minister Imran Khan with reference to the premier’s defamation case against him.

The Chief Justice of the IHC Athar Minallah remarked that the case should be heard on a daily basis and decided in due course.

He further stated that the court would order the trial court to decide the case within two months.

During the proceedings, the court asked Khawaja Asif's lawyer why he was postponing the case, claiming that he was unnecessarily delaying the case, cautioning him against doing so.

Referring to the premier's counsel, the court observed that it was the defandant's right to cross-examine the prime minister. It further maintained that the cross-examination should have been held the next day of the statement being recorded.

“The statement was recorded on December 17. How can the trial court terminate the right to cross-examine on the same day?” the CJ questioned.

Responding to the IHC chief justice, PM Imran’s lawyer aruged that Khawaja Asif had not appeared before the court for a year.

Earlier this month, PML-N leader Khawaja Asif had challenged the sessions court’s decision of not giving his counsel the right to present arguments in a defamation suit worth Rs10 billion filed by Prime Minister Imran Khan against him.

The prime minister last month submitted an affidavit to Additional District and Sessions Judge Muhammad Adnan via video link against the PML-N leader for levelling allegations of non-transparency, money laundering and use of anonymous companies in the Shaukat Khanum Memorial Trust funds.

The PML-N leader filed an application in the IHC against the lower court’s verdict and nominated PM Imran and the sessions court judge as respondents.