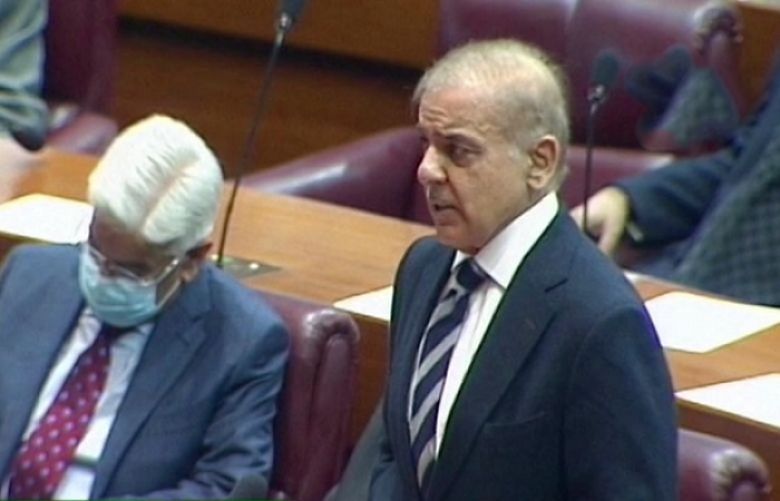 Leader of the Opposition in the National Assembly (NA) Shehbaz Sharif and Planning and Development Minister Asad Umar traded barbs on Tuesday, with the former claiming that the country's economy was being pawned away for $1 billion and the latter slamming the PML-N for leaving the economy in dire straits.

The exchange took place on the floor of the NA as the House began a debate on the controversial Finance (Supplementary) Bill, generally known as the mini-budget.

The bill is one of the requirements Pakistan has to meet under the programme agreed with the International Monetary Fund (IMF) in July 2019. If passed, the legislation will pave the way for the disbursement of a $1bn tranche.

As the matter was taken up for debate in the NA, Shehbaz questioned how it was possible for the country to be an atomic power on one hand and be holding a begging bowl in the other.

"The finance minister had said that Imran Khan would stand up to the IMF [...] he had said that a mini-budget would not be introduced and that there would be a tax-free budget. But seven months later, what has happened?"

He said that the PTI government only excelled in making U-turns. He said that taxes worth Rs350 billion were being imposed on the people who were already facing inflation and unemployment.

Assailing the government, the PML-N president said that the ruling PTI had drowned the country's economy and was also endangering its security.

He called on the government to withdraw the controversial finance bill. "We have our political differences ... but bring another bill and we will support that."

Shehbaz warned that the opposition would protest in the house and "on the roads" if the government tried to bulldoze such a bill. "They are selling out Pakistan's economy and freedom for $1bn."

He said that a nation that was habitual of begging could never progress. "Handouts, aid and dole outs will never be able to strengthen a society and make it stand on its own two feet ... for that you have to work hard."

He said that the PTI used to claim that it couldn't see any poverty in Khyber Pakhtunkhwa. However, their recent defeat in the local government elections must have opened their eyes, he said.

Shehbaz said that the country's citizens don't have money to pay their children's school fees, but the ruling party was oblivious to the issues being faced by the middle-class.

"The day is not far where a horde of people, frustrated due to poverty, unemployment and inflation, will descend and sweep away the country's most inefficient and corrupt government."

He accused the government of ignoring the opposition's input due to "ego". "They consider themselves Einstein."

Giving the example of bills related to the Financial Action Task Force (FATF), Shehbaz said the opposition had set aside differences and supported the government on multiple occasions in the wider interest of the country.

"But in return slogans of 'robbers and dacoits' were raised [against us]," he said, adding that this "polluted the society".