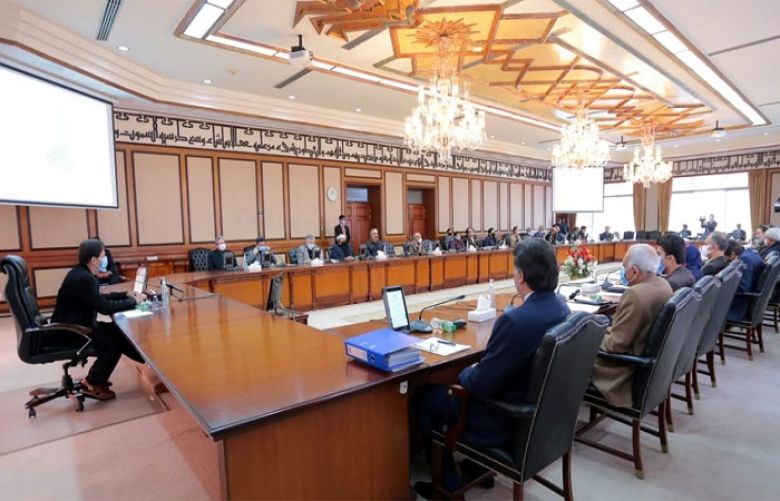 The federal cabinet has approved to proceed against Shahbaz Sharif in the Lahore High Court for submitting false affidavit in fraudulently escaping Nawaz Sharif abroad.

Briefing media in Islamabad this afternoon, about the decisions taken by the Federal Cabinet, which met in the federal capital with Prime Minister Imran Khan in the chair today (Tuesday), Minister for Information and Broadcasting Chaudhry Fawad Hussain said Nawaz Sharif's proceeding abroad on the pretext of medical reasons was an utter fraud. He said Nawaz Sharif has been living in London for 17 months, but he has not taken any treatment. He said the Punjab Government has rejected all the medical reports submitted by the Sharif family. He said Pakistan's embassy in London also contacted the Sharif family twice, but it did not cooperate.

Chaudhry Fawad Hussain said Shahbaz Sharif had submitted an affidavit guaranteeing return of his elder brother, who neither got any treatment nor returned to Pakistan. He said Shahbaz Sharif was fully involved in Nawaz Sharif's escape from the country. He said the government will pray the court that Shahbaz Sharif should be disqualified for submitting a false affidavit or he should be bound to bring back his brother as per promise.

Chaudhry Fawad Hussain said the cabinet was also briefed about Covid situation in the country. He said it has been decided that no lockdown will be imposed in the country as Pakistan's economy cannot afford this. He, however, appealed the people to observe precautionary measures, especially wearing of face masks at public places, to prevent spread of the virus. He said the government will keep monitoring the situation.

Regarding Electronic Voting Machines, the Minister said the Ministry of Science and Technology has been directed to provide EVMs to the Election Commission of Pakistan to hold next elections in Islamabad through these machines to ensure transparency.

The Minister said the Federal Cabinet approved electricity tariff adjustment of one rupee per unit for next three months to provide relief to the people. Besides, Science, Technology, and Innovation policy, Sambarial-Kharian Motorway, import of urea from China, and privatization of Guddu and Nandipur power plants were approved.

Referring to the tragic incidents of Murree, the Minister said the Prime Minister expressed deep grief and sorrow over the deaths of tourists there. He said the people died of carbon monoxide in their vehicles.