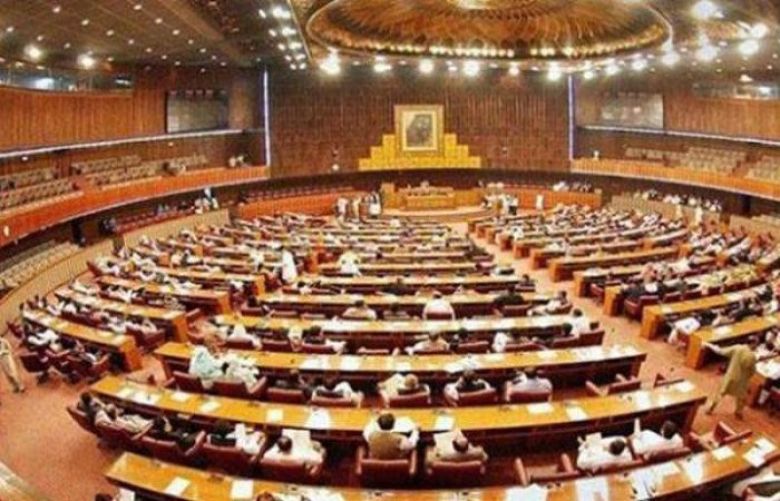 Federal Minister for Finance and Revenue Shaukat Tarin on Tuesday laid the supplementary finance bill — termed by the Opposition as a "mini-budget" — in the Senate amid a vociferous protest by the Opposition.

President Arif Alvi had summoned the Senate to meet in order to allow the government to lay before it the supplementary finance bill, which was introduced in the Parliament last week to meet the conditions of the International Monetary Fund (IMF).

During the session, Senate Chairman Sadiq Sanjrani referred the bill to the Senate Standing Committee on Finance seeking recommendations within three days.

It is pertinent to mention here that supplementary finance bill’s approval is necessary to ensure that the IMF executive board clears the country’s sixth review of the $6 billion Extended Fund Facility (EFF) on January 12 for the disbursement of the near $1 billion tranche.

On Monday, during the launching ceremony of Parliamentarians Tax Directory, Tarin said he would be laying the finance (supplementary) bill before the Senate on Tuesday to fulfil the key constitutional requirement, adding that the Senate could finalise its recommendations in four days and then the bill could be passed by the National Assembly.

He, however, also mentioned that there will be no problem if the IMF’s board extends its meeting for a couple of days in case of approval of the bill takes a few days more.

PPP senator and former senate chairman Raza Rabbani said that the bill that was tabled is one fraught with IMF conditions.

Highlighting previous claims made by Tarin, he said that the finance minister had said the decision to increase petrol prices was made due to the IMF. He also said that Tarin had agreed that the US is pressurising the IMF.

“What sort of pressure is on them from the US?” he questioned, adding that the "country’s security has been mortgaged".

Rabbani added that the House and citizens of Pakistan should be taken into confidence on why is Pakistan agreeing to the tough conditions of the IMF.

Following the Opposition’s protest during the session, Sanjrani directed Senators Faisal Javed and Ali Zafar to convince them to end it.