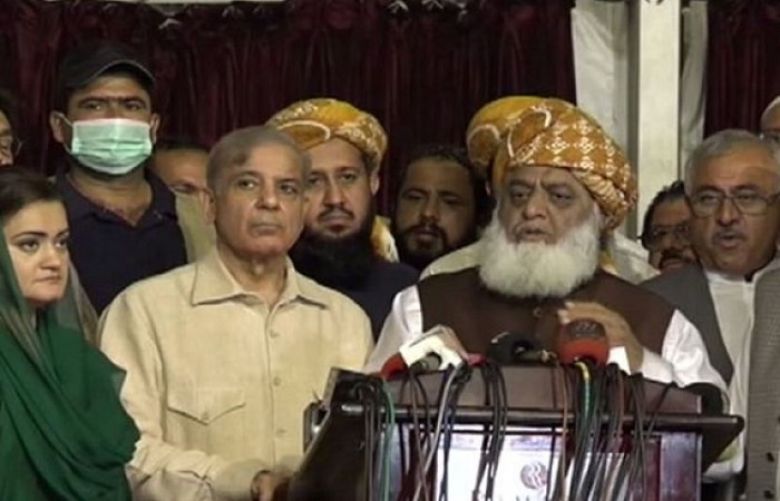 Pakistan Democratic Movement (PDM) chief Maulana Fazlur Rehman announced on Monday that the opposition alliance would hold an "anti-inflation march" in Islamabad on March 23, 2022, Pakistan Day, to protest against the government's failures.

Speaking to the media in Islamabad after a meeting of the heads of the PDM's component parties, Rehman said that the participants deliberated on the country's current situation.

He stated that the ruling PTI was brought into power as a result of rigging in the 2018 general elections, because of which it was facing failure on several fronts.

He said that the march will be a "huge demonstration" and the "whole nation will participate". "People will come to Islamabad from all corners of the country to participate in a demonstration against inflation, unemployment and poverty."

He said PDM meetings will be held at a provincial level to prepare a strategy for the march. Giving a breakdown, the PDM president said that he will chair a meeting in Khyber Pakhtunkhwa while PML-N supremo Nawaz Sharif, Pashtunkhwa Milli Awami Party (PkMAP) chairman Mehmood Khan Achakzai and Jamiat Ulema-i-Pakistan's (JUP) Awais Noorani will chair separate ones in Punjab, Balochistan and Sindh, respectively.

Rehman said that a seminar would also be held for which he would meet with the lawyers' community as well as the representatives of the Supreme Court Bar Association and the Pakistan Bar Council.

He said a date for the seminar would be finalised after consultations with lawyers, civil society, business and other communities so that all kinds of people could be taken into confidence over the alliance's policies.

Rehman said that the issue of submitting resignations from parliament was also discussed during the meeting, adding that there was consensus on the topic. "[But] we will decide when and where to use this," he said.

Concluding his speech, the PDM chief said that a meeting of the alliance's steering committee had been called for tomorrow at 2pm to devise a strategy for the decisions that had been taken.

"All the participants of the meeting also condemned the incident in Sialkot," he said, referring to last week's brutal lynching of a Sri Lankan national. "No citizen has the right to take the law into their own hands," he said, adding that such incidents should be stopped.

Questioned by a reporter over the date of the march, Rehman said that the PDM was also a "part of the nation". "It is a national level issue [...] no one owns the country, the state owns the country."

Asked about the duration of the protest, the Maulana smiled and replied: "You heard about March 23 right now. Wait and see what happens next."

In their last meeting on Nov 23, the PDM had failed to come up with a plan to launch its anti-government protest campaign, with the PDM chief declaring that they would meet on Dec 6 and devise “a final policy” and “announce very important decisions”.

In the last meeting, the Maulana was so furious with the PML-N leadership that at one stage, he reportedly even offered to quit the opposition alliance’s presidentship. However, at that time, Nawaz persuaded the JUI-F chief not to do so and sought time till Dec 6 for in-house consultations.

It was the third meeting of the heads of the component parties in six weeks, besides a number of meetings of its steering committee, after which the alliance leaders had announced that they were deferring the plan to launch, what they always say, would be a decisive and final phase of the anti-government protest that would culminate with a long march towards Islamabad.