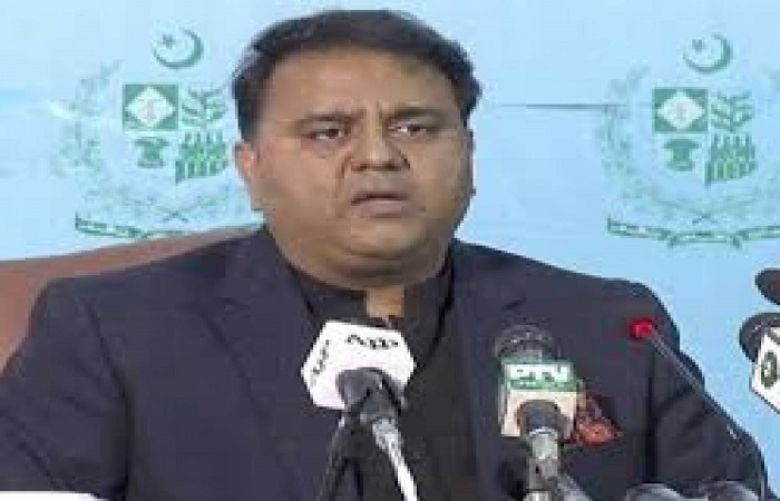 Federal Minister for Broadcasting and Information Fawad Chaudhry has said that the alleged audio of former chief justice of Pakistan Saqib Nisar is irrelevant in the Nawaz Sharif case, as it was heard by 16 judges and the former CJP was not one of them.

The federal minister said Nawaz Sharif and Maryam Nawaz should present the audio before the court hearing her case.

"If Maryam Nawaz believes she could elicit help from the audio, she should present it before the bench hearing her case.

It is the job of the judge who is hearing Maryam Nawaz's case to analyse the audio, in case she takes it to court, said the federal minister.

He also called into question the relevance of the audio. "The audio stands irrelevant as the Panama Papers case was heard by three CJPs, and nearly 16 judges and a trial court," Chaudhry noted.

Given that so many judges heard the case over stages, the surfacing of audio is thoroughly meaningless, he asserted.

"Whatever Maryam Nawaz and Safdar Awan say in this regard is irrelevant. The nation wants to know from where you [Sharif family] got the money for billions of rupees worth of constructions that you are currently living in," he continued. "You may answer this question today, tomorrow or afterwards. But if you fail to provide the details, the NAB court will penalise you for corruption under the NAB ordinance."

The irony, Chaudhry said, is that Nawaz Sharif lives in the apartments, appears from them and gives interviews, but the entire nation wonders if the apartments belong to him or not.

Commenting on the recent audio leak, the federal minister advised Maryam Nawaz and Captain Safdar to begin an audio/video business as both of them have attained "mastery in filmmaking and editing" and are "not capable enough to do politics".

Replying to a question about why the government avoided launching a probe over the audio, Chaudhry said it is not an executive-specific matter as the issue is pending before a two-judge bench of the Islamabad High Court (IHC). It is up to the IHC to decide the matter and the government will implement the order as per judicial directives, he added.

Chaudhry asked why such audios and videos are leaked when a vital case starts. The primary reason for such releases is that they do not want the merit-based verdicts so they get the attention diverted towards leaks, he said, adding that such leaks are let out under a well-planned conspiracy.