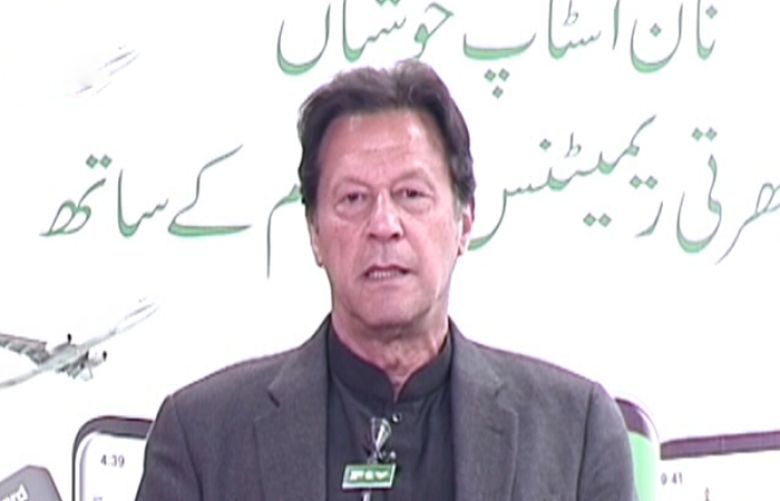 Prime Minister Imran Khan on Thursday stressed the need to incentivise and provide VIP treatment to overseas Pakistanis as they sent remittances to the country.

The premier was addressing the launching ceremony of the Sohni Dharti Remittance Programme (SDRP), which will award points to overseas Pakistanis for sending remittances through the legal channels, Radio Pakistan reported.

PM Imran Khan said the government appreciated their role in helping to bridge the gap between exports and imports — as remittances sent by them slightly offset the widening current account deficit.

The government is determined to extend all possible facilitation to overseas Pakistanis to encourage them to send their money through banking channels, the prime minister said.

Further, the premier said overseas Pakistanis could now buy houses and invest in real estate through the Roshan Digital initiative. He said the government was working on a plan to give them concession in taxes as well.

For his part, Adviser to the Prime Minister on Finance Shaukat Tarin said the programme was a "thanksgiving" to overseas Pakistanis.

The adviser said earlier banks were rewarded for attracting remittances, but now, for the first time, overseas Pakistanis will benefit from it by scoring points in the app.

"The gap between our exports and imports is bridged by our Pakistanis living abroad," the adviser said.

Meanwhile, Governor State Bank Reza Baqir said all home remittances sent from anywhere in the world through legal channels are eligible for inclusion in the SDRP.

Besides, funds received in Roshan Digital Accounts which are consumed locally through conversion, and thus become non-repatriable, also qualify for inclusion in the program, he said.

The governor termed the launch of SDRP another step towards digitalisation and financial inclusion that would play a significant role in the digital onboarding of overseas Pakistanis and their beneficiaries in Pakistan.

The mobile application of SDRP is available on Android and iOS platforms.

Under the SDRP, if an individual sends remittance to the limit of $10,000 or equivalent in one fiscal year, then they will be awarded 1% as a reward and allotted a green card category, a statement from the Finance Ministry said.

Similarly, for remittances sent by an individual between $10,000 and $30,000 or equivalent, the remitter would be given 1.25% as a reward and classified into the gold card category, the statement said.

Lastly, for remittances of more than $30,000 or equivalent, they will be awarded 1.5% as a reward and allotted a platinum card category, the statement said.