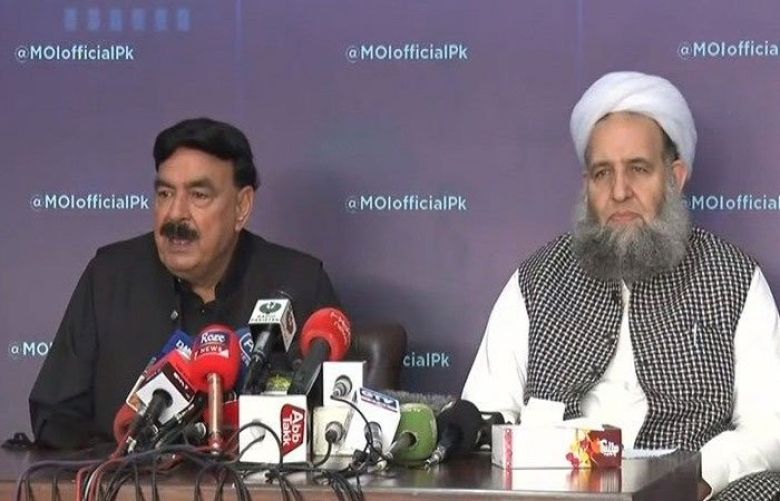 Interior Minister Sheikh Rasheed Ahmad Sunday said that talks between the government and the banned outfit Tehreek-e-Labbaik Pakistan (TLP) after they threatened to march towards Islamabad have been successful.

A day earlier, the Opposition parties and the proscribed outfit had staged separate protests in multiple cities of the country, resulting in Islamabad, Lahore and Rawalpindi being partially shut down.

Talking to journalists, the interior minister said that all the roads, which had been closed earlier to stop the protesters from marching towards Islamabad, will be reopened for traffic gradually.

The TLP protesters will not move forward [to Islamabad] and will stay in Muridke till Tuesday, he added.

After reviewing their demands, the issue will be resolved peacefully by Tuesday, said the interior minister.

Minister for Religious Affairs Pir Noorul Haq Qadri, meanwhile, said that the issue will be resolved through mutual understanding. He maintained that the concerned authorities have been directed that there should be no clash between the police and the protesters.

A day earlier, Prime Minister Imran Khan had directed federal and provincial ministers to hold negotiations with TLP after they threatened to march towards Islamabad.

Prime Minister Imran Khan had held a telephonic conversation with Qadri to discuss the prevailing law and order situation.

On the directives of the prime minister, Qadri had arrived in Lahore from Karachi to hold negotiations with the banned outfit's leadership.

The PM had also directed the interior minister to return to the country from the UAE, where he had gone to watch India-Pakistan's high-voltage T20 World Cup clash.

On Saturday, the government had dug up a trench on GT Road near Gujranwala in response to an announcement by TLP that they will set out on a long march towards Islamabad.

A deep and long pit was dug with the help of cranes while the roads were also blocked in advance by placing containers. Thus, all paths via road leading to and from Gujranwala were blocked.

Meanwhile, a procession by the banned outfit, the participants of which began marching from Lahore, had reached Sadoke.

The banned outfit had announced a "peaceful protest" on Friday after jummah prayers to demand the release of their leader Saad Rizvi.

Rizvi was taken into custody shortly after the federal government had declared the TLP a proscribed organisation under anti-terrorism laws and launched a broad crackdown against the party.

The action came after days of violent protests and traffic disruptions in the largest cities of Pakistan, which saw public and private property being damaged by gangs of hooligans bearing sticks and turning on law enforcement officials at will.

Speaking on the move, Prime Minister Imran Khan had explained that his government had taken action against the banned TLP because it "challenged the writ of the state and used street violence, attacking the public and law enforcers".

Two policemen were martyred in Lahore Friday night after a couple of cars collided during a protest by the banned outfit. Clashes between police and members of the outlawed outfit also resulted in over 40 cops getting injured.