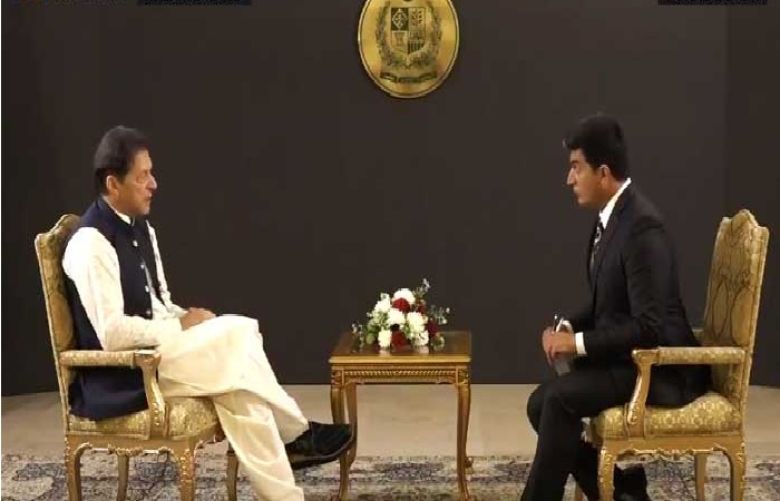 fail photo The US will have to recognize the Taliban government, Imran Khan

Prime Minister Imran Khan has said that the US will have to recognise the Taliban government in Afghanistan sooner or later. In an interview with TRT World, the prime minister said that it won’t make any impact if Pakistan unilaterally recognises the Taliban, adding that the US, Europe, China and Russia should recognise them on priority.

“Pakistan is in talks with neighbouring countries on the matter and a decision will be taken after consultation.”

When asked about the Taliban taking over Kabul, PM Iman Khan said we were scared about the bloodshed during the Kabul takeover and the peaceful transition of power was unexpected.

He again urged the international community to provide assistance to the Afghan government which he said was mostly dependent on foreign aid.

“If the international community does not come forward to help the Afghan people, a humanitarian crisis would emerge.”

The prime minister said that the US administration is confused after the Taliban takeover and now they are looking for a scapegoat. “It is painful to see they are scapegoating to divert attention.”

There was no military solution to the Afghan issue as Afghan people did not accept foreigners and under their traditions, they sought revenge if someone was killed at their homes, he added.

He explained that the people inhibiting Pakistani tribal areas started attacking Pakistan, led by groups like Tehreek-i-Taliban (TTP), when the government had decided to side with the US.

If you did not agree with the US policy or its military operations, he said, you were branded as pro-Taliban.

He said that he was even against the Iraq war as the use of military force is no solution to a conflict.

The prime minister said that in the 9/11 attacks, no Pakistani was involved, but the country had to suffer colossal damage in the US led war.

About 80,000 lives were lost, a huge chunk of the tribal population had been displaced with hundreds of billions of losses to Pakistan's fragile economy, while border areas were devastated, he said, adding that Pakistan had made these sacrifices for the US as mere a scapegoat.

He said a well-trained 3,00,000 Afghan army which was fully equipped with weapons could not resist the Taliban force, and the former president along with his government functionaries fled the country.

The prime minister expressed his optimism that when this angle and rationality appeared, the US would realise how could Pakistan be held responsible for its policies over Afghanistan.

He also strongly rejected the allegations that Pakistan had been assisting Taliban in capturing Afghanistan. The Taliban were seen in Kabul while riding on motorcycles without shoes, he added.

The prime minister said that the Afghan people had always resisted foreign forces, and had been very independent minded people. ”You cannot control them from [the] outside like [the] US tried to,” he added.

To another query, he said that from Pakistan’s point of view, an "inclusive government means a stable Afghanistan after four decades of war".

“As well wishers of [the] Afghan people, we want them to be stable. The idea that they could be controlled from outside is a fantasy. Pakistan only suggested there should be an inclusive government," he said, adding that the Taliban also understood it.

Prime Minister Khan said Afghanistan was home to multi ethnic groups, where Pashtuns were in the majority, while the Tajiks, Uzbeks and Hazaras were minorities.

Defending the US president, he said it is unfair to criticise Joe Biden.

“It is strange that if you criticise US policy you are labelled anti-American,” he noted. The PM said that he had objected to Pakistan’s policy of siding with the US war on terror which caused the country a loss of US$150 billion.

When asked why the US president had not called him, PM Imran Khan said Biden is under pressure right now. “I have sympathy for Biden. He is facing criticism at home [over the Afghanistan policy]. Talks between heads of states are just a formality.”

The intelligence officials of Pakistan and US are in contact, he said, adding that the foreign minsters of both countries are holding discussions as well.

The prime minster said that Pakistan launched a major military operation against the Taliban militants in 2014 and flushed them out.

“India’s RAW and Afghanistan NDS were supporting TTP for activities in Pakistan.”

He, however, added that the TTP attacks have increased in the last 40 days, but the situation is not as grave as it was.

"I think some of the Pakistani Taliban groups actually want to talk to our government. You know, for some peace, for some reconciliation."

When asked to confirm whether Pakistan is actually in talks with the TTP, the premier clarified to say that talks are ongoing "with some of them".

He said that the Afghan Taliban are "helping" in the sense that the talks are taking place in Afghanistan.

The premier said that these talks, for disarmament, if successful, will lead to the government "forgiving" them, "and then they [will] become regular citizens".