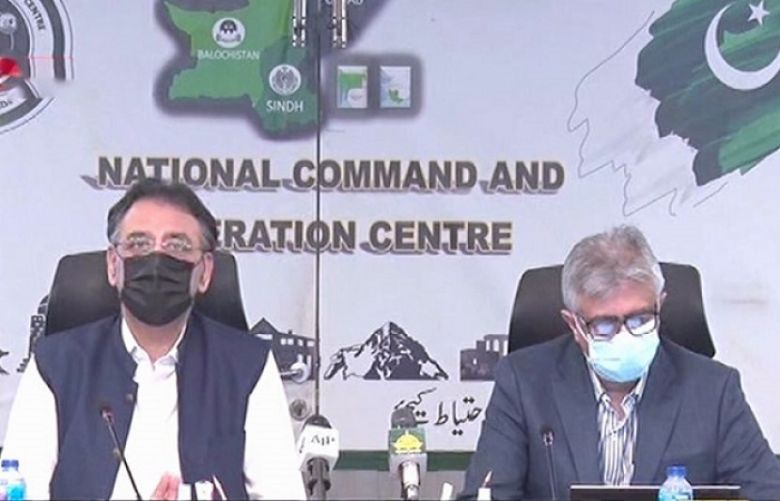 The government has announced a new strategy via which cities with low vaccination rates will have to undergo "higher restrictions", said National Command and Operation Centre (NCOC) chief Asad Umar.

Flanked by Special Assistant to the Prime Minister on Health Dr Faisal Sultan, Asad Umar said that the government had decided to vaccinate cities and areas where coronavirus positivity ratios were higher.

"Vaccination is the only way forward, as the world knows very well, to battle the coronavirus," he said. "Getting the most people vaccinated is the fastest way to get rid of the problems of coronavirus otherwise, we will have to depend on closures," he added.

He said lockdowns and closures usually meant economic losses and business setbacks. Umar clarified that increased vaccination rates will not, however, mean that coronavirus will be totally eliminated across Pakistan.

"However, it ensure that people are able to spend their lives normally," he said.

"Hence, keeping all this in mind, our NCOC meeting this morning decided that from October 1, our decision to impose more relaxation or restrictions in SOPs for cities and districts will be made on the basis of their respective vaccination rates," he said.

Umar said that the NCOC had set a target to vaccinate 40% of the 15 and above age group in Pakistan's 24 or 25 large cities. He said the cities who had achieved the targeted vaccination rate are Gilgit, Skardu, Muzaffarabad, Mirpur, Rawalpindi, Islamabad, Quetta and Peshawar.

"We are about to relax restrictions in these eight cities from October 1," he announced. "The rest of the cities and districts will have to implement on the same restrictions that are currently in place, till October 15," he added.

The NCOC chief said that persons who have been fully vaccinated against the coronavirus, in these eight cities, will also be able to watch movies in cinema houses from October 1.

Fully vaccinated persons can also visit shrines in the eight cities, Umar said, adding that however, the provincial government and district administration will keep a check on how the arrangements are made for people to visit these shrines and check whether they have been vaccinated or not.

Umar announced another relaxation for vaccinated individuals from October 1, not necessarily from these eight cities, adding that food during flights will be served to them.