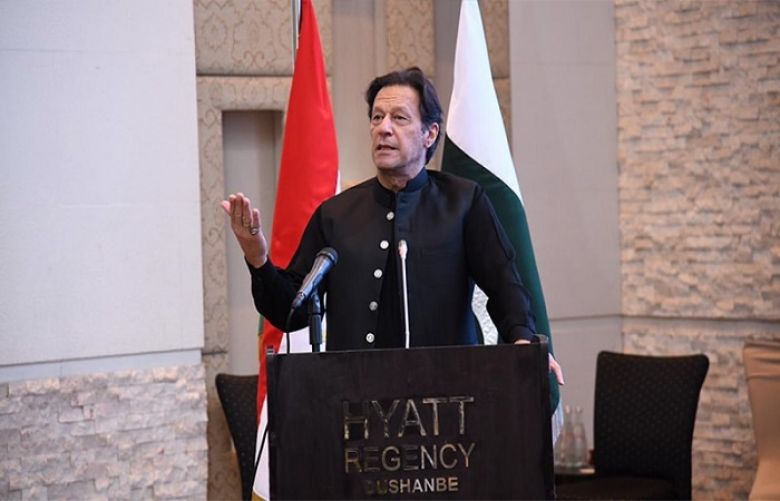 The prime minister is in Dushanbe to attend a Shanghai Cooperation Organisation summit. Addressing an event where businessmen from Pakistan and Tajikistan were in attendance, the premier said he wanted to speak to a joint gathering of businessmen from both countries.

"I believe we have representatives of 67 Pakistani companies here in Dushanbe. They come from different fields, including textiles, pharmaceuticals, and logistics," he added.

The prime minister lamented that the cost of electricity was too high in Pakistan. "We want the KASA 1,000 energy project to be completed soon," he said. "There are lots of opportunities related to the clean energy projects in Tajikistan."

He extended an invitation to Tajikistan's businessmen to invest in Pakistan, adding that the Pakistani government was creating opportunities and removing hurdles for its own business community as well.

"We will provide every help possible to investors in Pakistan," said the prime minister.

PM Imran Khan briefly spoke on the Afghanistan issue, saying that peace in the country was vital for the region's progress.

Afghanistan in focus as PM Imran Khan arrives in Dushanbe

The prime minister arrived in Tajikistan Thursday on a two-day official visit to attend the 20th Shanghai Cooperation Organisation Council of Heads of State (SCO-CHS) meeting in Dushanbe.

Accompanied by a high-level ministerial delegation, the prime minister will hold bilateral meetings with other leaders on the sidelines of the SCO Summit.

The SCO summit is the first meeting of the heads of states since the Taliban’s takeover of Kabul and all eyes will be on the Afghan representative at the meeting. Afghanistan has an observer status and has been striving for full membership of the organisation.

After attending the SCO-CHS, the prime minister will have the bilateral segment of the visit.

His talks with the Tajik president will cover the entire gamut of bilateral relations, especially enhancing trade, economic and investment ties with a particular focus on regional connectivity.

The two countries have earlier expressed a strong commitment to enter into a formal strategic partnership.

"Pakistan and Tajikistan enjoy close brotherly relations underpinned by the bonds of common faith, history and culture. The two countries have shared perceptions and a common desire to promote economic development, peace, security and stability in the region", the Foreign Office had said earlier.

"The prime minister has been invited by President Emomali Rahmon and this will be his third visit to Central Asia underlying Pakistan’s enhanced engagement with the region,” said the Foreign Office while announcing the visit.