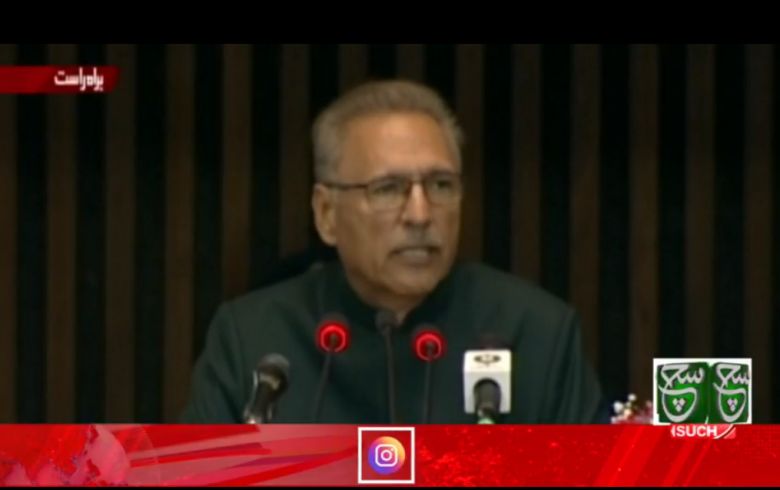 The president, at the outset of his speech during the joint session of the parliament, spoke about the economy. "Despite coronavirus, Pakistan's economy performed better as compared to other countries due to the government's prudent policies."

The Opposition began thumping benches and started a ruckus in the Parliament, at which the president said: "You can make all the noise you want, but you have to accept the reality — that the country is moving forward."

Alvi, citing a survey of the Overseas Investors Chamber of Commerce and Industry, said foreign investors' trust in the government had increased by 60%. The Federal Board of Revenue has collected Rs160 more than its target, he added.

The president said the increase in remittances and the boost in foreign investment showed that people trust the incumbent government.

President Alvi lauded the government for following up on all of the Financial Action Task Force's (FATF) recommendations and enacting laws to meet the requirements.

The president mentioned as many as 1.7 million young people have benefitted from the government's "digiskills" programme. "This is not a small number, as Pakistani freelancers have earned foreign exchange worth $2 million."

The government is well aware of the ever-changing needs of the industry. "Artificial intelligence, cloud computing, software development, internet of things, networking, data analysis, and other technologies will help us grow faster."

Talking about cyber security, he said the Pakistani youth can play a crucial role in the country's cyber defence.

President Alvi said the past governments did not focus on human development, and as a result, governance became weak, and Pakistan had to face a "brain drain".

The president said the government believes only an educated and healthy Pakistan can move forward, and for that, the PTI-led government introduced the Ehsaas programme.

The president said the government was focusing on telemedicine in a bid to save poor people's money, as they could get almost the same treatment via telephone.

Speaking about the increase in the country's population, he said it was becoming tougher for the government to provide health, food, transport, water, and other necessities to the masses.

"To provide the best to our children, I believe that we should promote birth spacing and focus on making the family smaller," President Alvi said.

Talking about education, he said under the leadership of Prime Minister Imran Khan, the government has awarded as many as 240,000 scholarships, which was the "biggest package" awarded by the government so far.

The Higher Education Commission (HEC) has informed me that it has announced to waive off tuition and hostel fee for people with different abilities, the president said.

"We decided to provide technical training and education to people on such a large scale to push Pakistan forward because an educated person cannot only increase their personal income, but of the country as well," he said.

The government has introduced laws and worked at the administrative level to stop violence against women, which has increased in recent days, the president said.

"It is the duty of the society as well to keep a check on these things. Making videos and such incidents taking place does not suit the Pakistani society," he said.

The president appealed to the people to make the country better for women. "Unfortunately, in some parts of the country, women are still denied their right to inheritance despite having clear instructions in the Shariah, and to counter that, the government has introduced a law."

"When we came into power in the Centre, the government announced 10 Billion Tree Tsunami and Clean and Green Pakistan — which will help Pakistan counter the effects of global warming," he said.

The president said it was imperative to introduce electoral reforms in the country, and through electronic voting machines, transparency and timeliness of results can be ensured.

President Alvi urged the Opposition to not make EVM a "political football", as the country's future was dependent on it. "The government is also taking steps to roll out I-voting systems to give overseas Pakistanis the right to vote, and I hope the Opposition will play its part in it."

The president said India was committing major crimes, especially against Muslims, in occupied Kashmir and demanded the Modi-led government to stop its atrocities in the region.

"The prime minister called himself the ambassador of Kashmir and raised their plight at every international forum," the president said, adding that Pakistan will always stand with the Kashmiris.

The president said PM Imran Khan, in his inaugural speech, had assured Pakistan wanted good relations with India, but New Delhi has never responded in a positive manner.

President Alvi thanked China, Turkey, Azerbaijan, Iran and other brotherly countries for backing Pakistan in its stance on the occupied territory.

The increasing sectarianism in India is a threat to the region, and the international community should acknowledge that, he said.

"India has been sponsoring terrorists in Pakistan for several years."

The theft of uranium and its buying and selling in the open market in India is a dangerous event, which exposes the Indian administration's incompetence, he said.

"Had such incidents taken place in any other country, the international media would have scrambled to cover it, but the same coverage was not given to the issue in India," he said.

PM Imran Khan has "become a champion against Islamophobia" and has sought the international community's support to counter the challenge.

Speaking about Afghanistan, he said PM Imran Khan had always stressed that there was no military solution to the Afghan war, and after 20 years, the result is before you.

"We have played an important role for peace in Afghanistan and want this new government to unite the Afghan people [...] they should ensure the Afghan land is not a threat to any neighbouring country," he said.

The international community should start providing aid to the Afghans and not leave them alone in these times of despair as it would give birth to a humanitarian crisis, he said.

Pakistan is giving special attention to geo-economics and regional connectivity and aspires to connect the region's economies through China-Pakistan Economic Corridor.

"Peace in Afghanistan will indeed be very beneficial for the region."

The president said 3-4 million Afghan refugees had been welcomed in Pakistan over three to four decades and asked the world to not teach the country humanitarianism.

President Alvi lauded PM Imran Khan's coronavirus smart lockdown policy. "The government did not shut down all businesses and relied on data [...] which was later acknowledged by the world."

The president also applauded the media and ulema for playing their respective roles in curbing the spread of the virus.

The president highlighted that Pakistanis needed to counter fake news as these sorts of stories were the reason behind one country going to war with another — pointing at the United States' invasion of Iraq.

As per a notification issued earlier, President Alvi had summoned both houses of the parliament to assemble together in the Parliament House and the decision had been taken by the president in the exercise of his powers under Article 56(3) of the Constitution.

Meanwhile, all Opposition and independent members of the two houses boycotted the presidential address after raising their voice for solidarity with the media having sit-in outside the Parliament House to oppose the establishment of the Pakistan Media Development Authority (PMDA) and electronic voting machines.

Journalists, on the other hand, were forbidden to enter the press gallery of the parliament before the commencement of the session. In response, the Parliamentary Reporters Association (PRA) members staged a protest inside gate number 1 of the Parliament House.