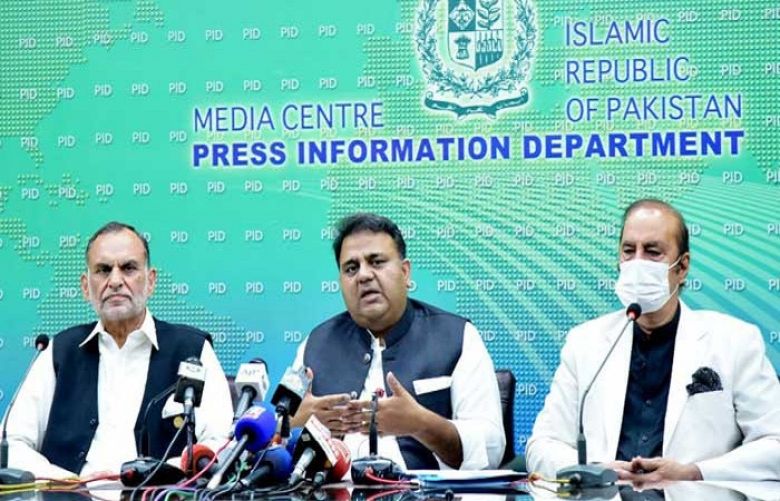 Federal Minister for Information and Broadcasting Fawad Chaudhry on Friday said that it seems the Election Commission of Pakistan has "become the headquarters for Opposition parties" and the chief election commissioner is "acting as their mouthpiece".

Speaking during a press conference in the federal capital alongside Minister for Railways Azam Khan Swati and Adviser to the Prime Minister for Parliamentary Affairs Babar Awan, Fawad said that no one is satisfied with the ECP because "it comes up with strange logic."

Chaudhry said that the PTI-led government had promised to make the ECP free, fair, and transparent, and to that end, a commission for reforms — headed by Justice Nasirul Mulk — was also formed. However, the ECP remains surrounded by controversies due to its "strange logic".

The minister said that the PTI government had asked the Opposition to come forward and participate in discussions related to electoral reforms.

"The government wanted to incorporate technology in the electoral process [to ensure transparency], however, it seems like the ECP has become the headquarters for Opposition parties."

The minister said that all institutions of the country, including the ECP, must abide by the law.

Chaudhry said that in fact, it is not the ECP that must be considered as a whole while talking about the law, but the chief election commissioner, who has "become fond" of acting as a "mouthpiece of the Opposition".

He said that PML-N leaders are trying to make legal amendments related to the use of EVMs "controversial".

The minister said that the chief election commissioner should "either take a look at his behaviour or join politics."

He added that whenever the Opposition loses in elections, it starts crying foul about rigging.

"Our Opposition comprises intellectually-stunted parties. The only skill they have is to seek extensions for the hearings of their court cases."

Speaking about the incorporation of technology into the electoral process, Chaudhry said that even the Supreme Court of Pakistan endorsed it to ensure transparency.

On the other hand, Senator Babar Awan said that the bill on electoral reforms was passed in the National Assembly after eight months but the Opposition did not present a single suggestion throughout this period.

"The Opposition has become the enemy of electoral reforms as they want to maintain the status quo," Awan said.

Moreover, the bill had to be passed by the Senate in 90 days but it was rejected only a few hours before the conclusion of the stipulated 90-day period, he said.

"It is for the first time in history that the Senate committee bulldozed the government's legislation," he said.

"We have now decided to take the bill to the joint session of the Parliament on September 13 and will convene a National Assembly session a day after that."

Awan said that the government will soon complete the legislation under a Supreme Court order.