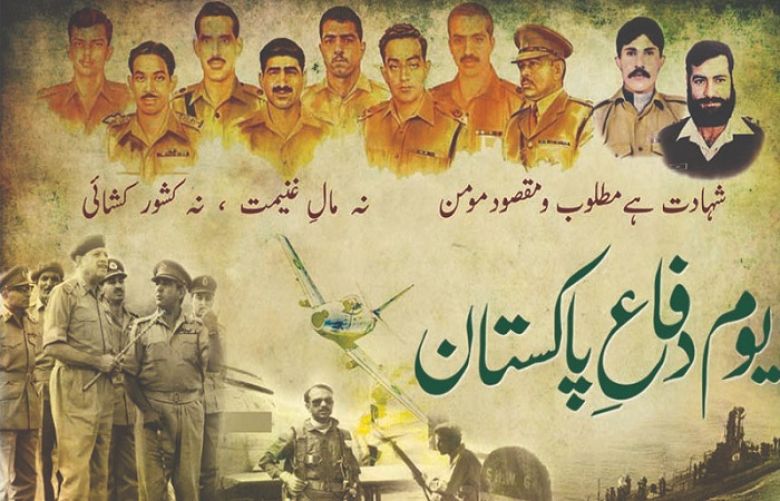 Pakistan paid a befitting tribute to the country's armed forces Monday, who lay down their lives for the motherland, as it marked another anniversary of Defence Day.

On Septembr 6, 1965, the Armed Forces of Pakistan successfully thwarted an Indian onslaught in the dead of night. Pakistan's armed forces and their heroics helped push back the enemy in a successful defence that saw the entire nation back its troops during the war.

This year's Defense and Martyrs' Day theme is "Our martyrs our pride, salute to all the relatives belonging to ghazis and Shaheeds.”

Special prayers in mosques across the country were offered at Fajr for the peace and prosperity of the nation. Prayers for the liberation of the people of occupied Kashmir against the Indian forces were also offered.

Fatehas and Quran Khawanis for the martyred are also being held across the country.

Radio Pakistan is also airing special programs comprising national songs, interviews of the family members of the martyrs and ghazis to pay homage to the defenders of the motherland.

In his message on Defence Day, President Alvi vowed that Pakistan will never compromise its integrity.

The president expressed his confidence that the spirit of September 6 had made Pakistan stand firm and steadfast against all odds.

"Today we are actively fighting a hybrid war being waged against us. I commend the security agencies for their relentless efforts towards exposing the enemy carrying out covert activities", he added.

Alvi saluted families of the soldiers who have laid down their lives for the country, saying that he commends them for their fortitude and forbearance.

Separately, Prime Minister Imran Khan also paid tribute to the valiant soldiers of the Pakistan Army, recognising their efforts to keep the country safe and protected against all sorts of aggression.

"My message on this day to the valiant Armed Forces is that together we have come a long way in the struggle for making Pakistan’s defence strong and impregnable", he said.

"Let us pay homage to our Shuhada and ghazis and pledge anew to defend Pakistan, safeguard its security and sovereignty at all costs. Pakistan Armed Forces Zindabad. Pakistan Paindabad", the prime minister maintained.

Meanwhile, PPP Chairman Bilawal Bhutto Zardari said that the sacrifices of the martyrs, the unwavering determination of the soldiers and the invincible unity of the people of Pakistan is our strength and the guarantee of our bright future. “The struggle of PPP is to make Pakistan from stronger to the strongest,” he said in his message on the eve of Defence Day.

Bilawal said that the befitting celebration of Defence Day of Pakistan is to protect geography, its ideology and democracy.

“On this Defence Day, I, on behalf of entire nation, assure the families of our martyred heroes sincere support and sympathies,” he added.