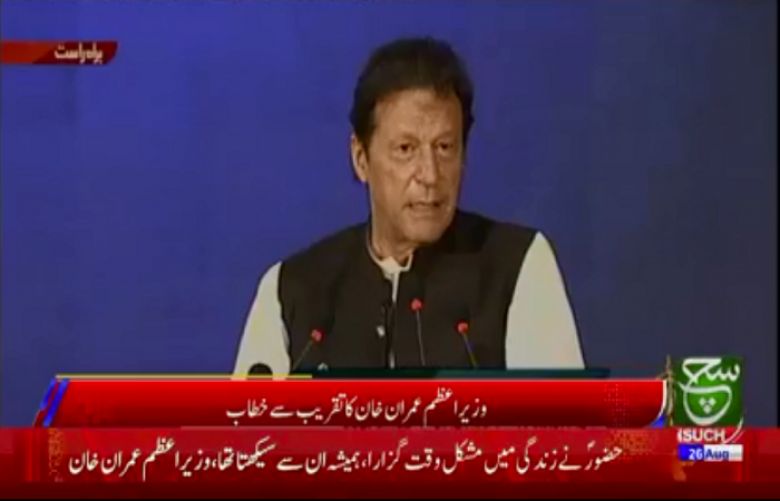 Prime Minister Imran Khan is addressing the nation, to present his government's performance over the last three years.

A ceremony is underway at the Convention Centre in Islamabad to unveil the report.

He quipped: "I was looking at Faisal Javed Khan. He is so enthused always whenever he gets a mic, he never lets go of it, like in our jalsa days."

The premier also lauded Sindh Governor Imran Ismail's talent for producing PTI anthems, saying it may very well overshadow his performance as a governor. Ismail earlier sang "tabdeeli aayi re" in the event, besides humming a tune in the making for "mujhhe kyoon nikala".

The prime minister shed light on the importance of the youth recognising that our prayer to God to put us on the path of blessings, not of ruin, is the path of the Holy Prophet (PBUH).

"If we want to be great, God has already laid out the path for us."

The prime minister recalled how he was mocked in the party's early days, but said that he continued to focus on one thing: how the Holy Prophet (PBUH) saw such hard times but remained resolute.

"We must never fear such times. Yes, this is a hard time (for Pakistan), but we must not panic."

"The ups and downs in life prepare you (for greatness)," he said.

Addressing the youth, he said: "Don't ever think that life is easy. If it is easy, that means you have no standing."

"Whoever stands on the true path, has to face difficulties. All of Allah's messengers faced troubles. And that is the path we believe in.

"But people want an easy way out and at the same time seek the path of blessings [...] you must never cry over such times.

"If you understand and analyse such things properly, you will see that the tough path is the path to your success," he said.

The premier added: "No one has achieved success without failing. It is impossible for someone to just land on his feet."

"No one has become a leader with shortcuts. Look at the struggle of Quaid-e-Azam. If there is one leader I believe in, it is him.

"The way he struggled, especially towards in end, during his illness. He did not do it for his personal gain, he did so for a greater purpose. And this is why people will continue to laud him."

The prime minister said that last three years were spent with "great difficulty" after having inherited a bankrupt country left behind by past rulers.

"Our reserves were [low], our liabilities [high]. We had no money to pay back our debtors. We were not going to default, we were in the process of defaulting, because we had no foreign exchange."

He also spoke of other challenges: the coronavirus crisis, and before that the Pulwama incident.

'Thank God for the Pakistan Army'

"And this mafia that gave speeches against our army [...] I too have spoken out against the army in the past [...] everyone makes mistakes, but the aim is not to malign them.

"The Indian lobby is trying its best to malign the Pak Army [...] and this has been going on for a while," said the premier.

He said that it is due to the confidence that the country has in the Pakistan Army, that it was able to boldly tell the Modi government that if they tried anything, Pakistan will provide a befitting response.

PM Imran Khan is expected to highlight the key achievements of his government marking a journey of stable economy, development and welfare projects, according to Radio Pakistan.

The report aims to give an insight into the efforts of each ministry and division in facilitating the common man in line with the vision of Naya Pakistan.

The performance report 2018-21 has been compiled by the Ministry of Information and Broadcasting under the patronage of its head Chaudhry Fawad Hussain.

The 251-page report gives an outline of the achievements of 44 public bodies, including ministries, divisions and departments, through infographics and relevant facts and figures.